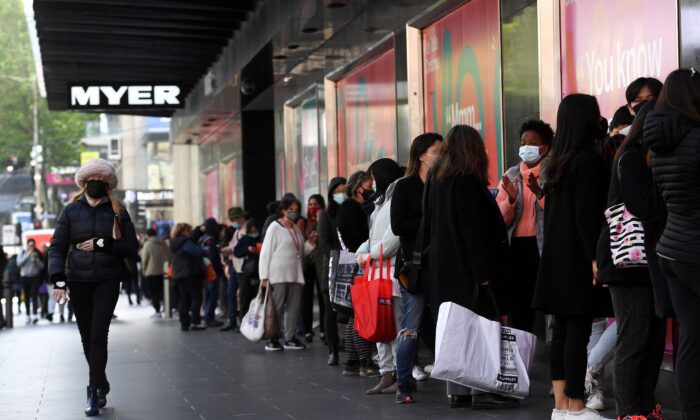 Economists are feeling a degree of uncertainty over key workforce data for January as the unknown impacts of the Omicron COVID-19 variant outbreak hit economic indicators.

The jobs market has been bouncing back robustly after the 2021 Delta variant lockdowns ended, causing the jobless rate to slump to a 13-year low of 4.2 percent. Nevertheless, economists think there are still some ways to go before the unemployment rate achieves the level predicted by authorities.

In addition, there are also concerns that the labour force data could be skewed by Australians who gave up searching for jobs in despair when facing the Omicron outbreak.

The federal government and the Reserve Bank of Australia (RBA) anticipate that the unemployment rate will drop below four percent in 2022, which is a record not observed in some 50 years.

The Australian Bureau of Statistics will release the workforce report for January on Feb. 17, which contains essential data such as employment figures and the labour force participation rate, an economic indicator that measures the percentage of people in work or actively seeking jobs.

It is uncertain whether people quit looking for work during the outbreak of the Omicron variant early this year, which may cause the labour force participation rate to drop.

Even if the January employment figures are more restrained than earlier months, and economists are worried a decrease in the labour force participation rate could lead to another fall in the unemployment rate.

Most economic forecasts predict the jobless rate to drop slightly to 4.1 percent. However, there are different expectations on the real figure, which vary between 4 to 4.4 percent.

Many economists also anticipate that employment is likely to plateau or remain unchanged, but expectations range from a dip of 60,000 jobs to a 59,000 increase.

On Feb. 15, the RBA will publish the minutes of its February board meeting where it announced the decisions to keep the cash rate at a record low of 0.1 percent and put an end to the bond-buying program worth $350 billion (US$249 billion).

Nevertheless, there are doubts over whether the minutes will reveal anything new other than the information economists have obtained from the recent RBA’s quarterly statement on monetary policy, the speech of governor Philip Lowe at the National Press Club, and his appearance before the House of Representatives Committee on Economics on Feb. 11.

At the hearing on Feb. 11, Lowe restated that it was plausible to increase the cash rate in 2022 as the economy witnessed rising inflation and an anticipated drop in unemployment.

However, he warned the committee that the economic recovery would be at risk if the RBA pushed up the cash rate too early.

In addition, Treasury Secretary Steven Kennedy will present his department’s opinion on the economic outlook when he appears at the hearing held by the Senate’s economics committee on Feb. 16.

Meanwhile, financial markets expect Australian shares to have a weak opening on Feb. 14 after a sharp fall in Wall Street stocks on Feb. 11 as tension mounted up between Ukraine and Russia.

Australian Prime Minister Scott Morrison alerted the public on Feb. 13 that the situation was worsening and approaching a perilous stage.

Given the escalating tension, the federal government has ordered the evacuation of the Australian Embassy in Kyiv.