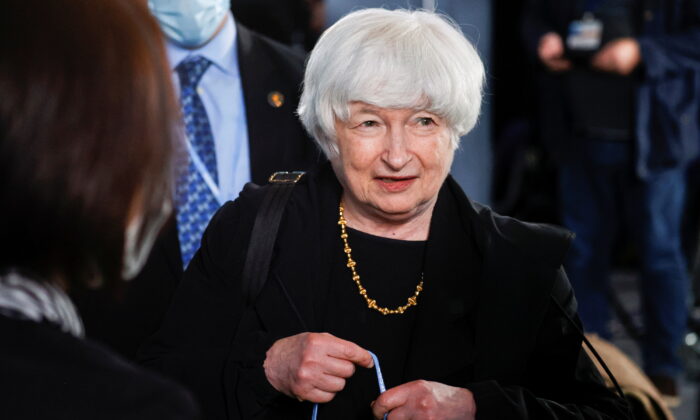 As the economy keeps recovering from pandemic-related restrictions, and life “returning towards normal” with “increased vaccination and booster shots,” Yellen said that the new variant “could be with us for quite some time,” leading to behavioral patterns that could contribute to inflation.

The Delta variant caused a slowdown in the American economy earlier in the year. And, given how highly transmissible the new variant appears, there is a great deal of uncertainty in markets and among world governments.

Currently, Omicron, which was first identified in southern Africa, has now spread to around 24 nations around the world, including the United States, Canada, and countries in Europe and Asia.

As of now, symptoms are reported to be mild in the cases found in South Africa as well as the United States, but scientists are asking for more time to provide definite conclusions on the latest variant.

Flights coming in from southern African countries have been banned or restricted while passengers traveling from these locations are subject to screening and quarantine measures.

“Hopefully it’s not something that’s going to slow economic growth significantly,” Yellen said. “There’s a lot of uncertainty, but it could cause significant problems. We’re still evaluating that.”

Pandemic-related lockdowns in China and sudden increase in consumer demand tightened worldwide distribution networks contributing to supply chain disruptions, which could be worsened by Omicron. However, a decrease in demand could ease some of the stresses on the supply chain leading to lower inflation rates, said Yellen.

“I’m ready to retire the word transitory. I can agree that that hasn’t been an apt description of what we’re dealing with,” Yellen told the virtual global conference regarding the description of the current inflation, which is the highest seen in the United States for over 30 years.

She said that the word means different things to different people, stepping back from her insistence that the current levels of inflation were temporary, a viewpoint that was concurred by Fed chair Jerome Powell.

On Wednesday, Powell changed his stance regarding the temporary nature of inflation. “We’re not at all sure of that. Inflation has been more persistent and higher than we’ve expected,” he said to the House Financial Services Committee.

Republicans maintained that it was excessive government spending contributing to inflation. “It is the multiple trillions of dollars that this Congress and this administration is spending that is putting jet fuel on the fires of this economy,” said Rep. Patrick McHenry (R-N.C.) at the same hearing.

Yellen said on the call that the Biden administration’s $1.9 trillion American Rescue Plan could have “somewhat” contributed to inflation but it was mostly the surge in pandemic and consumer demand that has run up the prices in the economy.