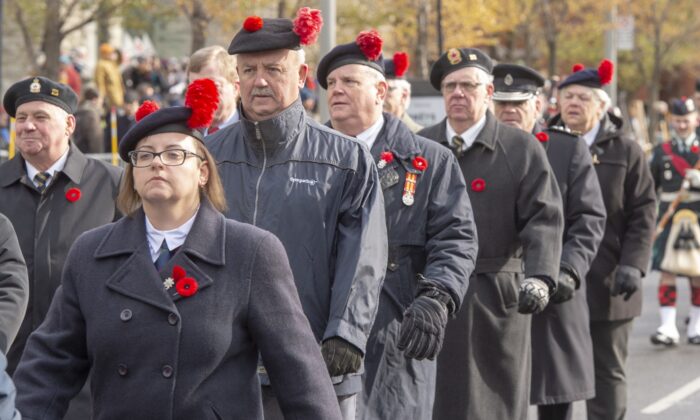 Veterans march during Remembrance Day ceremonies in Montreal on Nov. 11, 2019. Veterans ombudsman Craig Dalton is calling for nationwide consultations to develop what he says is a much-needed vision and plan for supporting former service members and their families. (The Canadian Press/Ryan Remiorz)
Canada

OTTAWA—The watchdog for Canadian veterans is calling for nationwide consultations to develop a much-needed vision and plan to support veterans and their families with all their needs.

The call by veterans ombudsman Craig Dalton follows more than a decade of anger and broken political promises over the financial compensations available to those hurt in uniform through the three benefits regimes that have been in place at different times over the years.

The current “Pension for Life” scheme was rolled out by the Liberal government last April and provides more money to most former military personnel than the “New Veterans’ Charter” it replaced.

Yet both have been blasted for offering less money than the original Pension Act, which the Charter replaced in 2006. That is despite the Pension for Life and New Veterans’ Charter having additional rehabilitation programs and other supports to try to offset the difference.

Dalton believes the bitter debate around the three regimes misses the mark. Rather than talking about how much money veterans can receive under each, he said, the focus should be on whether veterans and their families are getting what they need.

The challenge, he added, is there is no clearly articulated vision, let alone a plan, for what the government wants to achieve for veterans.

“There’s been considerable investment in veterans’ programming in recent years, and there’s no doubt that investment has made a difference in the lives of veterans and their families,” Dalton said in an interview this week.

“But that investment is still taking place in an environment where we do not have a clear strategy, a clear vision for what we are trying to achieve for veterans in this country.”

It is in this context that Dalton would like to see the government hold nationwide consultations with veterans and non-veterans alike, including service providers and advocacy groups, to find out what they really need and to chart a path toward accomplishing the task.

“Government goes coast to coast to coast when they’re developing things like legalizing marijuana or talking about gun-control policy or copyright infringement or budget and everything else,” he said.

“So I think it would be great if we were to have a national conversation to say: What is our vision for veterans? That could then inform discussions about whether we are meeting their needs or not and if they’re not … where is the best place to do that.”

Canada would not be the first country to conduct such an exercise. In fact, it was the recent experiences of the United Kingdom and Australia that prompted Dalton to start thinking about the need for a broader vision for veterans.

Dalton suggests the federal government could learn a great deal from the British experience, where the government unveiled a new veterans’ strategy in November 2018 that included consultations and annual reports to Parliament as the plan is implemented.

In the absence of such a vision, Dalton worries successive governments will continue to struggle to meet veterans’ needs.

“When you look at the amount of change that’s occurred in the area of veterans’ programming over the last 10 to 15 years, it’s significant: Programs added, programs removed, programs altered, all without a real clear understanding of where we are hoping to go,” he said.

“Not that those programs weren’t addressing needs that emerged but did those discussions take place inside of some sort of a broader framework focused on a future vision for veterans?”