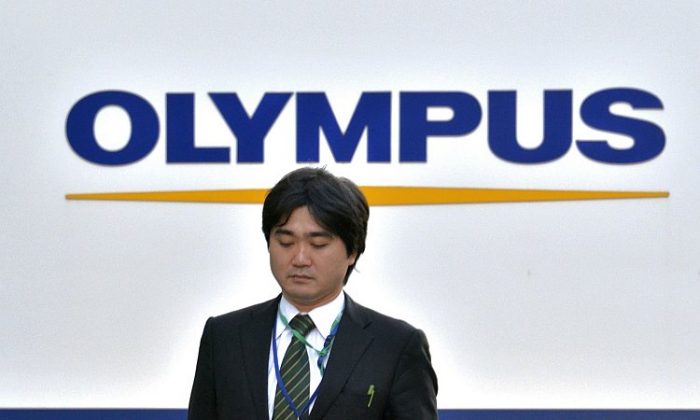 A businessman walks past a showroom of the troubled Japanese optical company Olympus in Tokyo on Jan. 10. Scandal-hit Olympus said it was suing 19 current and former executives for a combined US$215 million in damages relating to a massive investment cover-up. (Yoshikazu Tsuno/AFP/Getty Images)
Business & Markets

Japanese camera maker Olympus Corp. has launched a legal battle against its president, Shuichi Takayama, and 18 other executives who have allegedly engaged in a conspiracy to conceal losses of $1.7 billion.

On Jan. 9, the company’s auditors filed a lawsuit at the Tokyo District Court. The claims involve current and former Olympus employees.

For over a decade Olympus managers were allegedly part of an extensive cover-up to suppress information about investment losses that had resulted in $1.1 billion in damages to the company, based on independent panel conclusions released this week. The losses were concealed in various offshore funds.

British-born Michael Woodford, the company’s former president who had been with Olympus for 30 years, was dismissed in October 2011, when he questioned the board regarding various mergers and accounting matters.

Woodford also sued the company and filed for damages for the value of the remainder of his contract and extra costs. His case was filed in the United Kingdom. Woodford has indicated that he may also commence legal action in Japan, according to a Bloomberg report.

Woodford’s departure was a main instigator for third parties to launch investigations into the company’s corporate governance.

Takayama was promoted to take Woodford’s place upon his dismissal. Takayama maintained that he was unaware of the fraud, but he was sued in this week’s lawsuit for breaking certain fiduciary duties while serving as a director at the company.

Woodford has said that he will not try to re-take the helm at Olympus, citing a lack of support from Japanese institutional shareholders.

In a rarity to Western observers, Olympus has not dismissed the 19 executives being sued and is allowing them to stay on until at least later this year.

“The plan is for the current board members who were found responsible and are subject to lawsuits to complete passing on their roles to avoid any impact on business,” the company announced in a statement on Wednesday.

Despite Olympus being a household name for cameras, the company actually makes the bulk of its money in the health care industry and is a leading maker of endoscopes. It remains in financial trouble, as a recent audit revealed its equity to be lower than originally reported.