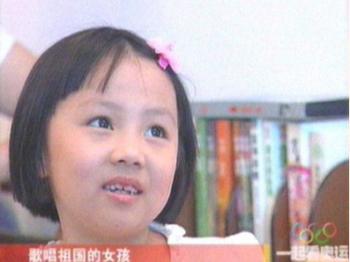 BEAUTY WINS - Real voice behind Olympic opening ceremony song doesn't get to perform because of her appearance.(AFP/Getty's Images)
China

By Samuel Spencer
Print
Add a young lead singer to the faking scandals that have hit the opening ceremony in Beijing.

Lin Miaoke, a pretty young girl who had soared to national fame after appearing to have sung at the Olympics opening ceremony, was actually lip-synching to another’s performance, musical director Chen Qigang admitted on Beijing Radio.

The actual singer was a seven-year-old girl named Yang Peiyi, who had won a gruelling competition to perform the anthem.

"The reason for this is that we must put our country's interest first," musical director Chen said in the interview. "This was a last-minute question, a choice we had to make," he added.

A member of the all-powerful Chinese Politburo had apparently called for a switch at the last minute during a dress rehearsal, since he thought that Yang might not be suitable because of her "buck" teeth.

Lin Miaoke, nine years old, had become a celebrity after the opening ceremony and had been giving media interviews all over China. Her father told the state-run China Daily that she had fans from all over the country.

Lin is reported to have acting experience, having already appeared in television commercials before the ceremony.

But there was outrage on the Internet among Chinese bloggers over the switch, and why Lin Miaoke was allowed to give so many interviews, built up into a media darling and allowed to take all the praise for the singing.

The U.K. based Telegraph newspaper reported that Lin was told that she would be lip-synching only 15 minutes before the actual ceremony.