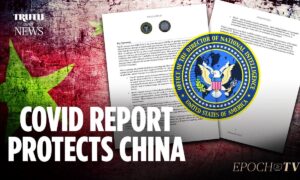 Ren Baiming
biggersmaller
Print
Chen Qigang, music director of the Beijing 2008 opening ceremony, disclosed during an interview that the nine-year-old singer Lin Miaoke, whose voice moved millions of viewers during the ceremony, was not singing. She mimed the voice of seven-year-old Yang Peiyi.

Chen explained the miming was in the interest of the country and he expected that people in China would understand. Chen seemed confident in what he had to say. It seems, not only was the stage designed for singing, but the Communist Party had already carefully planned who was going to step up to explain what had happened and why, what to say, and how to get away with the charade, by using the ultimate Chinese weapon, “orders from high level officials.” What happened was according to the plan.

Overnight, Lin’s heavenly baby “voice” made a great impression on the world. She is bound to become the public’s focus. Unfortunately, she simply can’t sing in public whenever asked, because people would immediately know the truth. Because of this, Zhang Yi-mou, the general director and his team would be in an unfavorable position for they genuinely mislead one billion people. Therefore, not long after the ceremony, Chief Director Chen, stepped up to expose the miming and to win the favor of public opinion. Chen used “state interest” and “the order from central government leaders” as double-insurance and therefore limited the scope of backlash from the public and the media.

Regarding this scandal—the party openly mislead the world. Chen said confidently that he believed the Chinese people would understand. The hidden message was, they were not worried whether the people would understand or not; they did not need people to understand a thing. The mimed singing had already escalated into a political issue. Chen hinted that the central government leaders had already said that presenting a perfect looking singer was to protect the country’s interests and when things get political, Chinese people automatically understand.

Seeing hundreds of thousands of rural workers and appellants being expelled from Beijing like livestock, seeing the human rights activists being arrested and tortured, and seeing all the military and police occupy the streets, one truly knows what is political and what state interest is all about.

The Chinese people are seriously mentally impaired. They live in a world full of counterfeit goods, false news and contrived propaganda. In every corner of society, the Chinese people have the greatest capacity for lying. In this kind of environment, there is no room for those with sensitive minds. This is why director Zhang said, “I am not a fighter, I am like you” to justify his fallen morality.

But the Olympics came, like an angel landing on earth and was represented as the fulfillment of the Chinese people’s dream for decades to come. Ordinary Chinese people can’t help but hope, in the name of their country, to give the world a truly moving moment, like Cinderella wishing a magnificent wedding.

However, in the name of the country, there is mimed singing. People worldwide were angered. In a routine press conference held by the IOC in Beijing, major media from around the world questioned, “What do you think about the dubbing incident in the opening ceremony?” “What kind of message do you think it sent to the youngsters in the world?” “How would you feel if you were the child’s father and she was told at the last minute that she would not be the one singing on stage?”

A country highjacked by the Party

The world suddenly sees through China’s Red Curtain, a country highjacked by the Chinese Communist Party (CCP) to present a delusion to the world in the name of its arrogant state interest. The Chinese people’s wish is benevolent, but the reality is cruel. Again and again for over five decades, the people were urged to resist the so-called ‘anti-government’ forces in the name of state interest. The people had to swear their loyalty to the country in every political campaign. Under the CCP’s rule, the Chinese people live for the interest of the country and guard their minds with these interests.