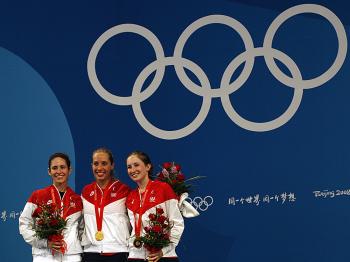 Mariel Zagunis of the USA (C) celebrates next to her compatriots Sada Jacobson (L) and Angelica Ward on the podium of the women's individual sabre on August 9, 2008 at the Fencing Hall of National Convention Center Adrian Dennis/AFP/Getty Images ()
News

Epoch Times Staff
View profile
Follow
biggersmaller
Print
The Olympics began with sports from badminton to weightlifting, from team sports like soccer to individual sports like fencing, and from indoor sports like gymnastics to outdoor sports like cycling. The women’s individual sabre (fencing) saw a rare sweep, with the U.S. winning all three medals.

Coming up on Day 2, Michael Phelps will begin his quest for a possible eight gold medals. The U.S. men’s basketball team will face China, while its soccer team faces the Netherlands. The women’s cycling road race goes on day 2 and the tennis tournament begins as well.