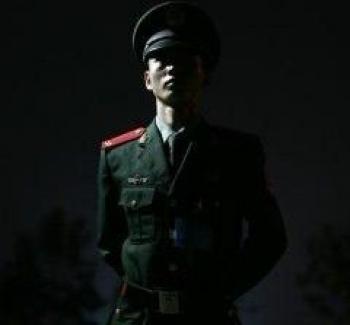 The Chinese Communist Party is attempting to control all dissent during the Olympic Games. (China Photos/Getty Images)
Opinion

Don Robertson
biggersmaller
Print
When the Chinese Communist Party talks of “terrorism”, foreign onlookers have to be aware that their definition is different from ours.

When most of us think of a terrorist group we think of ruthless acts that harm the people, such as suicide bombings or biological attacks. We might think of a group that has aspirations to install a fundamentalist government and rule by fear.

But when the Communist Party talks of a threat, they think of groups that threaten their power over the people. The groups themselves don’t have to be violent, but the regime will stop at no violence in attacking these groups and stop at no measure on the general populace to weed them out.

This distinction could not be clearer than in the Party’s “anti-terrorist” measures leading up to the Beijing Olympics. ‘Who are those terrorists?’ we ask. ‘Al Qaeda? Jemaah Islamiyah?’ Well, yes, it’s them too. But it’s mostly people and groups that we would consider harmless, even glorious – famous democracy activists, the Dalai Lama and his followers, practitioners of Falun Gong meditation and the Uyghurs of the far-western Xinjiang Province.

Two of the most famous Chinese democracy activists, Chen Ziming and Wang Juntao, gave a lecture in Sydney last week, and I didn’t see the Australian Government taking measures against them. The Dalai Lama is a Nobel Peace Prize laureate. Smiling old ladies give out Falun Gong flyers in the streets. When we’re talking about these people, the word “terror” certainly doesn’t come to my mind.

But they were the “main terrorist threats” named by Li Wei, the director of government think-tank the Anti-terrorism Research Centre at the Institute of Chinese Modern International Relations. “We can’t neglect the threats from international terrorism forces either,” Mr Li adds in the July 4 report in state media, almost as an afterthought, “though their threats are not big.”

So how is the regime preparing to deal with these groups? With the infantry, navy and air force, said Tian Yixiang, Head of Military Work Section of Beijing Olympic Security Coordination Group in a state media report on July 8. Mr Tian named exactly these groups as the main threats. No mention of Al Qaeda.

It’s these people that are targeted in dragnets installed around Beijing, should they come to the capital to appeal. All vehicles entering and leaving the capital undergo a “safety check”, to see if they have a permit to enter Beijing. There are even reports that train commuters in Hebei Province have been ordered to trample on a photo of Falun Gong’s founder Li Hongzhi, with those who refuse being arrested.

In addition, frighteningly reminiscent of the Cultural Revolution, ordinary people have been mobilised into a “social safety control system”, making them personally responsible for security in their designated area. They include work units, organisations and teams of local residents, who can be seen in the streets of Beijing wearing bright red armbands.

A leaked document from the Central Political and Judiciary Affairs Committee gives a glimpse into that network. “All levels should sign letters of responsibility with management objectives, get clear of their responsibilities one by one, study the measures to implement task by task and assign tasks unit by unit, individual by individual,” says the document, dated February 19.

It’s an enormous operation to silence dissent and it functions at all levels of society. Yet still a lot of Western media outlets, strangely unable to find a dissenting voice, tell us that the Chinese people like it this way.

But that’s not what interviews by The Epoch Times uncovered. Beijing residents told us by phone that they are living in fear.

“It’s as if the whole society has been put on duty,” Beijing resident Ms Zhou said, “with leaflets distributed everywhere telling us that if we see suspicious people, or people coming to Beijing to appeal, or people passing out leaflets, we have to report them.”

Beijing resident Mr Ma said: “Transport is really inconvenient. If you go out, maybe you’re a little busy and you forget your ID…that means big trouble. There’s a sign on our street that says ‘report any foreigners to the police’ and there are leaflets stipulating all kinds of rules. They are scared that city residents will tell foreigners about the real situation here. We’re all put under a lot of pressure.”

Chen Wang said: “It’s as if a national disaster is upon us. The authorities response is ‘if you are inconvenienced, please understand’. It’s just like during the SARS period, society has been sealed up, with restrictions on movement and interaction, people who come in from outside have to apply and register.”

For sure, security during any big event is important. And we are told by state media that authorities have already foiled several terrorist attacks.

But a quick look at the main targets tells us what these “anti-terrorist” measures are really about. They are about targeting groups and individuals that would not be feared in a free and open society. They are about ensuring the world only sees what the Party wants us to see. They are about terrorising the Chinese people to ensure the Party’s stability, because the Chinese Communist Party is terrified of dissent.