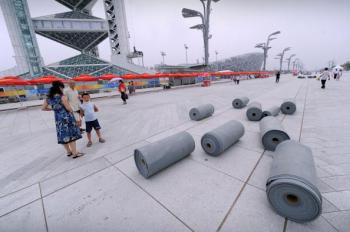 Healthcare company Johnson & Johnson led a delegation of sponsors in filing a complaint to the International Olympics Committee (IOC) over the extremely strict security measures in place by the Communist regime, which they say are causing their sponsorship investment to go to waste.

The excessive security, which the Chinese Communist Party (CCP) had boasted about being its top priority, has made access to the advertising pavilions in the Olympic Green almost completely closed off to the public.

After the complaint, Olympic organizers decided to introduce a ticketing system that intends to increase the number of visitors to the park from 40,000 per day to 200,000.

Sponsors have also faced what some call “ambush marketing,” where rival advertisers have launched campaigns designed to associate themselves with the Olympics, despite not being official sponsors, thus saving themselves the heavy fees charged by the International and Beijing Olympic Committees.

This is especially significant in light of the 10 first-level sponsors having paid an average of $US67 million for their prime position.

Some have considered these “ambush marketing” tactics to have reached a peak when 1984 gold-medal gymnast Li Ning was chosen to light the Olympic cauldron during the Opening Ceremonies. Li is the owner of the largest sportswear company in China.

Li’s company rose 5 per cent on the Hong Kong Stock Exchange the day after the Opening Ceremony.

Official sponsor Adidas said that they had “no hard feelings”, despite both this event and the occurrence of the Li Ning company having sponsored the television commentators during the torch relay,  giving Li Ning massive exposure throughout the country.

It’s also reported that yesterday China Daily newspaper distributed their publication around the Olympic park with a full-page advertisement for Nike, who is not an official sponsor.

The first day of the new ticketing system was undermined by torrential rain which forced the few who made it to the Park into the only restaurant at the Games, McDonald’s.