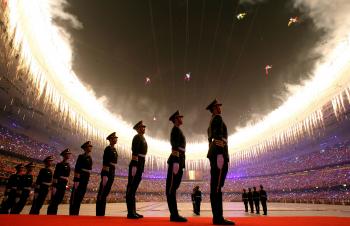 Members of the Chinese military stand at attention during the opening ceremony for the Beijing Olympics at the National Stadium on August 8, 2008. (Phil Walter/Getty Images)
International

The Bird’s Nest erupted with fireworks and giant-scale performances as some 91,000 spectators besieged Beijing's main Olympic stadium on the 8th of the 8th, 2008.

While an estimated 3 billion viewers who tuned in to the opening ceremony marvelled at the military-like drumming and synchronisation, the acts showed a country vastly different from the issues China has been confronted with in the lead-up to the Games.

The Olympic Rings sparkled and flew into the air, as the Chinese characters representing “harmony”-  one of the Olympic ideals – appeared on the ground. 2008 drummers paraded, while children twirled umbrellas showing the faces of smiling kids from every corner of the globe.

These Games have been shrouded in controversy since the day Beijing was awarded hosting rights in 2001. They were dubbed the “Genocide Olympics” by US actress Mia Farrow as she slammed China's involvement in the Darfur crisis. Declared the “Bloody Games” by members of the Coalition to Investigate the Persecution of Falun Gong in China for their heinous human rights atrocities.

Politicians such as European Parliament member Edward McMillan-Scott have highlighted parallels to the 1936 Berlin Games, while pushing for leaders to boycott the opening ceremony.

Many individuals and groups have stepped forward to express their concern in the moments that China is in the spotlight. Curbing dissent has been a large part of the regime's lead-in to the games, adding to the anticipation that something will unfold.

The opening ceremony came complete with glitz and glamour, calling for peace and a better future for the environment, as children painted the globe and chanted slogans about ice caps and global warming.

The environmental reference comes at a time when Beijing struggles to filter out the smog that has engulfed the city, sparking health concerns from many athletes worried about poor air quality affecting their performance. Some of the US cycling team turned up in Beijing days ago wearing face masks.

A giant white dove, the symbol of peace, was formed during the opening ceremony. In contrast, more than one million people were evicted to make way for the stadium and other Olympic structures without adequate compensation.

As the athletes bathe in Olympic Village luxury, thousands of Sichuan residents have barely a tent.

Four hours after the official opening, the stadium was lit in a sea of red, the colour of China's communist flag.