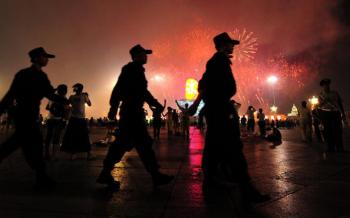 The long-awaited Beijing Olympic Opening Ceremony is over, awing millions of spectators around the world with its grand display of people, lights, and power. With over $40 million going into its making and over one thousand rockets shot into the heavens to force the gathering rain clouds to dissipate, the ceremony certainly produced grandiose images.

Commentators praised the ceremony as the most spectacular Olympic opening ever and a display of Chinese culture.

Most spectacular Olympic opening? Of course—yes, if one judges by the scale of the theatrical spectacle. But Chinese culture? Sadly—no.

The opening featured elements from Chinese history, such as painting, printing, opera, and drums. My American friend said to me, “Isn’t it great the ceremony goes back to the Chinese roots?” I sighed for my lack of a short answer and explanation.

The ceremony adopted the forms, perhaps, of Chinese culture, but not at all its essence.

Forms can deceive. Many people, including NBC's commentators, say that the Chinese culture focuses not on the individual but on the collective, as was shown in the opening performances.

It is true: Chinese culture places individuals in relation with one another, and with heaven and the earth. But the establishment of these relations also means that Chinese culture is community—centered, humane and humble. Therein lies its greatness.

However, in the Olympic opening the relational and communal spirit was absent, replaced by a larger than life “grand image.” What was displayed was not the Chinese concept of the collective, but the communist idea of "the masses." In the mass, the individual only has significance in relation to the authority directing the mass, not in relation to other individuals or to heaven and the earth.

The masses taken together are an instrument of power. The high-tech opening drum sequence was intended to overpower the viewer. Modern technology worked with the massed drummers to amplify their power and lend the authoritarian system another means of control.

The core of Chinese culture and of the Chinese collective is not the display of power. It is a system of moral principles, such as benevolence, truthfulness, tolerance, and the golden doctrine of the mean.

The Chinese use the phrase “move the heart and please the eye” to describe a valued artistic experience, which is also a moral experience. Sure, some things (but not all) in the Olympic opening could please the eye, but many Chinese expressed on blogs the thought that the ceremony was empty of morality and did not move people’s hearts.

The Chinese virtue of moderation comes from a strong sense of Heaven, or the Tao, from whence human power is believed to come. The unbridled human power and, in the words of the Chicago Tribune, “in-your-face grandiosity” displayed at the Olympic opening show anything but moderation.

In the traditional Chinese story "Foolish Old Man Who Moved the Mountain," the old man’s determination moved the gods, who then removed the mountains that blocked access to the old man’s house. In Mao Zedong's use of the story, however, the masses replace the gods in moving the mountains.

According to Zhu Dake of China’s Tongji University in an interview with the Financial Times, the ceremony’s director Zhang Yimou implemented a statist aesthetic combined with fascistic tendencies of totalitarianism that recall the ruthless first Emperor of Qin over 2,200 years ago.

The grand image created by the Opening Ceremony is intricately connected with China’s human rights abuses. The grand image becomes the justification for the Chinese Communist Party’s rule that the masses should willingly serve and a means of control of the masses.

Such grand images have been labeled “development,” “harmony,” and now a “safe Olympics.” Those who depart from the requirements for the grand image have no network of relations that protects them.

The Chinese people forcibly removed from their homes for the building of the Olympic venues have certainly gained no sympathy from the regime, and have failed predictably in their efforts to register a protest in one of the three parks Beijing set aside ostentatiously for protestors during the Olympics.

It is for the sake of the grand image of ensuring a safe Olympics that countless Chinese people have been arrested, jailed, and tortured. Falun Gong adherents are the largest group of people suffering such oppression. About 10,000 Falun Gong were arrested in the Olympic preparations, and some of them have been tortured to death faster than ever before.

Grand images are seductive. My aunt, a Falun Gong practitioner, was sentenced early last year to seven years in prison for keeping Falun Gong material in her home. Her arrest was a precursor to waves of Olympic arrests in China. My cousin, who cried at the darkness of China after doing all she could to help my aunt but to no avail, said a few days ago that she “understands” the government’s pre-Olympic arrests because anyone hosting an important party for the first time would be nervous.

My cousin, who loves my aunt dearly, has been “won over” by the grand image of the safe Olympics. She, in this one instance, is becoming a member of the masses, and the grand image the Party has broadcast has had its intended effect.

The Opening Ceremony was for the sake of the Party, and the more powerful its images, the greater the betrayal of China’s people and its ancient culture.

Hong Jiang teaches at University of Hawaii and her research focuses on cultural geography and the environment of China.