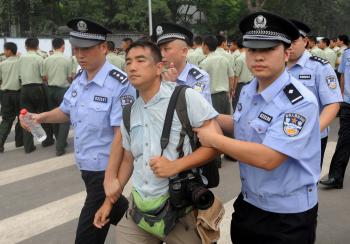 Chinese police detain a newspaper photographer Felix Wong from Hong Kong, who was photographing people waiting to buy the final batch of Olympic tickets, on sale near the Olympic Stadium in Beijing on July 25, 2008. (Mark Ralston/AFP/Getty Images)
International

Media Freedom for the Beijing Olympics an Empty Promise

LONDON—Beijing has betrayed its Olympic promises of media freedom, with some foreign journalists even facing serious threats to their lives, according to a human rights watchdog.

“Conditions have worsened in some areas over the past year," says a report recently released by Human Rights Watch.

The 25,000-30,000 journalists expected to cover the Olympics are facing risks greater than those they they were led to expect.

"Nearly all say that journalists today continue to face significant obstacles whenever the issues on which they wish to report are deemed 'sensitive' by central or local authorities,” states the 71-page report.

The regime's bid to host the 2001 was deemed successful in part because of a pledge to improve media freedom, coupled with the belief held by the International Olympic Committee that the international attention of the Games would help improve the human rights situation in China.

The freedoms were listed in the “Service Guide for Foreign Media” which  states “the Regulations on Reporting Activities by Foreign Journalists shall apply to the coverage of the Beijing Olympic Games and the preparation as well as political, economic, social and cultural matters of China by foreign journalists.” The temporary regulations were to be in effect from January 2007 until October 2008.

To find out what the conditions for journalists were actually like, from December 2007 to June 2008, Human Rights Watch interviewed 60 foreign correspondents.

Although some reported greater mobility and access, many  recounted obstruction and intimidation by authorities when a story was being pursued, when they  tried to dig into corruption, social unrest, public health crises, and China’s large detention system, including prisons, labour camps, mental hospitals, and police stations.

“Most recently, the Ministry of Foreign Affairs has declined to investigate death threats made against more than 10 correspondents and their family members in March and April 2008" say Human Rights Watch

The report takes the example of senior Reuters correspondent Chris Buckley who was beaten and detained by plainclothes thugs in September 2007 after interviewing rural citizens who had come to Beijing seeking redress for abuses committed  by local authorities who were held at an illegal detention facility in Beijing.

A spokesperson from international journalist rights group, Reporters Without Borders (RWB), told The Epoch Times: "The occasional good news, such as the unblocking of access to certain foreign websites and the reopening of Tibet, have been eclipsed by a series of outrageous arrests and increased surveillance of human rights activists.

"The Olympic infrastructure is in place, but police controls have been stepped up, the Internet is still censored, international radio stations are jammed and Beijing's air is still polluted."

"All these topics are banned in the Chinese press," said the RWB spokesperson. "And the luxury
of the Olympic Press Centre that was inaugurated today in Beijing will not help foreign journalists to forget how precarious their rights are when they try to probe sensitive issues"

Chinese journalists, have been placed under even stricter constraints prior to the Olympics. They are prohibited from reporting on anything that could generate unfavorable publicity before the games.

According to a June report in the Hong Kong Financial Times, Hu Jintao told the Chinese media to “maintain strict propaganda discipline”.