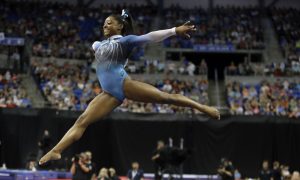 The brother of Olympic gymnast Simone Biles has been arrested on murder charges, police said.

The Cleveland Division of Police confirmed to The Epoch Times that Tevin Biles-Thomas was taken into custody after a grand jury returned charges of murder and other alleged crimes.

The incident in question took place on New Year’s Eve in 2018.

Police said that a group that was not invited to a house party near Denison Avenue and West 45th Street walked into the home around 11:30 p.m. and “an altercation ensued between the uninvited guests and those who were invited.”

“The altercation led to gunfire and multiple victims were shot, three of which were fatal. Several party attendees fled the scene,” the department and the Cuyahoga County Prosecutor’s Office said in a joint statement.

Three males—DelVaunte Johnson, 19, Toshaun Banks, 21, and Devaughn Gibson, 23—either died at the scene or were soon pronounced dead at a nearby hospital.

Cleveland police detectives investigated the shooting and identified Biles-Thomas as one of the people who opened fire.

“The investigators within the Cleveland Police Homicide Unit remained committed to securing an arrest in this tragic case,” said Cleveland Division of Police Chief Calvin Williams in a statement. “We appreciate our partnership with the Cuyahoga County Prosecutor’s Office and are confident that their efforts will bring justice for the families affected by this terrible incident.”

“The relentless persistence of Cleveland Police Homicide detectives helped secure an indictment in this case,” said Cuyahoga County Prosecutor Michael O’Malley. “It is through their hard work that we can begin to seek justice for these victims.”

A grand jury in the county returned an indictment, obtained by Epoch Times, charging Biles-Thomas with six counts of murder, three counts of voluntary manslaughter, five counts of felonious assault, and one count of perjury.

His scheduled arraignment is Sept. 13.

Biles-Thomas’ sister, 22-year-old Simone Biles, is a celebrated gymnast who won a gold medal as part of the American team in the 2016 Olympics.

She wrote on a 2017 Instagram post that accompanied a photo of her with her brother: “everyone says we look like twins but we don’t see it.”

Biles has not directly commented on the arrest but posted on Twitter late Thursday: “eating my feelings don’t talk to me.”

eating my feelings don’t talk to me

A day prior, she wrote: “let people assume incorrectly.”

Officials told News 5 earlier this year that the house where the party and shootings took place was an Airbnb rental. The listing for the rental stated that parties are not permitted.

A company spokesperson told the broadcaster that the person who booked the apartment was banned from the website after the shootings, and the listing was also removed.

“The safety of our community is our priority, and our thoughts are with the victims of this senseless tragedy,” the spokesperson said. “We have banned this guest from using our platform and are in contact with Cleveland PD to assist with their investigation.”

Families of Victims Speak Out

Family members and other loved ones spoke about the loss of those who were killed.

Cheria Hall-Hobbs, the mother of Gibson, said that her family started a scholarship fund in Gibson’s name. Shortly after the death of Gibson, Hall-Hobbs’ cousin was shot dead.

“Whoever gets this is someone who has the same determination as my son,” said Hall-Hobbs, noting her son was enrolled in trucking school and was a student at Tri-C with a 4.0 grade point average. “Someone who wants something, they might just need a little help.”