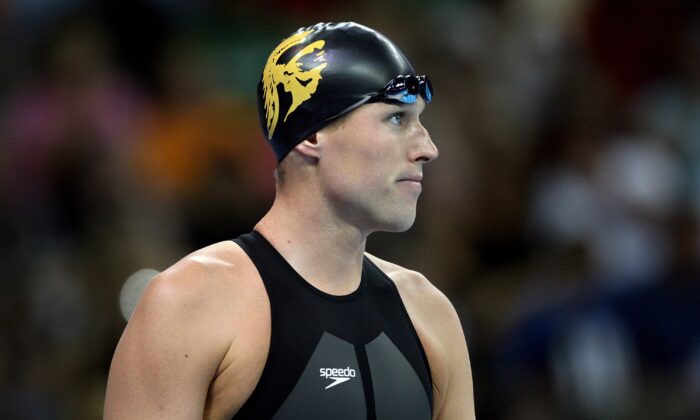 Klete Keller prepares to compete in the semifinal of the 200-meter freestyle during the U.S. Swimming Olympic Trials at the Qwest Center in Omaha, Neb., on June 30, 2008. (Donald Miralle/Getty Images)
Sports News

A former Olympic swimmer who won gold two times for the United States pleaded guilty on Wednesday to a felony charge in relation to his participation in the U.S. Capitol breach earlier this year.

Klete Keller of Colorado Springs admitted to the count of obstruction and agreed to fully cooperate with law enforcement in the investigation, according to court documents.

The 39-year-old gold medalist explained that he was aware when entering the government building he was trying to obstruct an official proceeding.

U.S. District Judge Richard Leon in the District of Columbia accepted Keller’s guilty plea at the Sept. 29 court hearing. Leon will sentence Keller at another hearing that has yet to be scheduled.

The charge has a recommended sentence of between 21 and 27 months in prison, but Leon is not bound by that range.

Keller was wearing a jacket with the letters “USA” as he entered the Capitol building at about 2:40 p.m. on Jan. 6, where he walked around for about an hour, taking videos and pictures while knowing he did not have permission to be in the building and despite being told by authorities to leave, officials said.

He then advanced further into the building, moving from the Rotunda towards the Ohio Clock Room hallway, where he stood with several other protesters. At this location, Keller began filming law enforcement officers wearing riot gear who were attempting to prevent the group from moving forward.

According to prosecutors, at this point Keller started yelling “[Expletive] Nancy Pelosi!” and “[Expletive] Chuck Schumer!” before others began pushing forward toward law enforcement officers.

About 20 minutes later, Keller returned to the Rotunda where he continued to take pictures and make videos inside the building. He then “jerked his elbow, shaking law enforcement officers off him as they attempted to remove him from the area,” prosecutors said. He eventually left the building at about 3:30 p.m. after authorities deployed chemical irritants at protesters inside the Rotunda.

Keller is a five-time Olympic medalist who held off Australian great Ian Thorpe on the anchor leg of the 4x200m freestyle relay at the 2004 Athens Games to win gold for the United States.