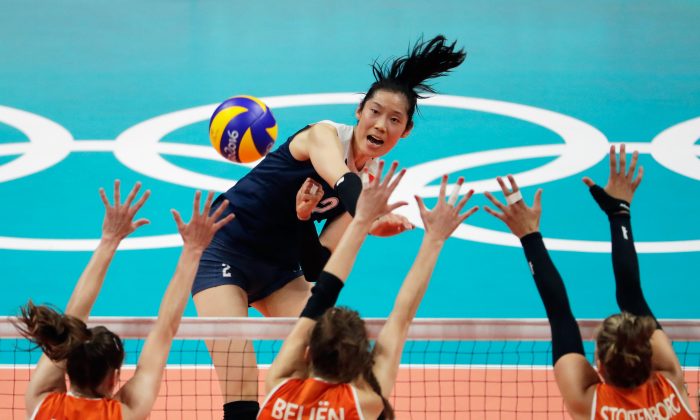 Top volleyball player was one of six children
By Eva Fu

Twenty-one-year-old Zhu Ting, China’s outside hitter who became a heroine lauded by state-run media after leading the Chinese women’s volleyball team to victory in the Rio de Janeiro Olympic Games, very nearly didn’t make it into this world.

Zhu Ting was crowned the star player at Rio after she scored 33 times in the semifinals. The Fédération Internationale de Volleyball also named her the number three “all-time top-scorer.”

An exultant China savored the moment. The women’s volleyball team last won a gold at the Olympics in 2004. In 2008 it won a bronze, and in 2012 finished in fifth place, out of the running for a medal.

Following the stunning victory were the awards and celebrations that are standard for Olympic victors in China. Zhu’s family was overwhelmed by visits from local and provincial officials, while honorary titles, such as “the most beautiful family of Henan Province,” flowed in one after another.

But even as state media and netizens heaped unprecedented attention on the athlete, the reports and online comments made note of the irony that Zhu’s family, with six daughters, was in flagrant violation of China’s one child policy.

In a commentary, CCTV explained the awkward situation this way: “While the accomplishment Zhu obtained for the country was in part due to her parents’ nurturing, it was the gold medal that transformed a household that violated the one child policy into ‘the most beautiful family.’ This has unavoidably led to the perception that the title was granted too casually.”

Netizens were much less reserved in pointing out that Zhu Ting could win Olympic Gold because she survived the one-child policy.

“After the women’s volleyball team seized the gold, the Henan Provincial and Zhoukou City Family Planning Committees should also be rewarded for their contributions—for sparing the butcher’s blade,” one comment on Weibo said.

Another netizen remarked, “We give thanks to the family planning committee for sparing her from death.”

“Had we completely followed the birth control policy, there would not be Zhu Ting today,” said another. “Four hundred million babies…How many olympic champions, tech giants and maestros would there be?”

Zhao Baige, deputy director of National Health and Family Planning Commission, said at a U.N. conference on reproduction in Beijing in October, 2009, that the policy had reduced the Chinese population from potentially 1.7 billion to around 1.3 billion, according to the state news agency Xinhua.

The policy had for decades strictly restricted most couples to only one child, intending to control the nation’s growing population. It has recently been scaled back to a two-child policy, and rural families like Zhu’s had been allowed a second birth if the first child was a girl. Those found in contravention of the policy face fines, forced abortion, or sterilization.

Zhu was the third child, and her family was so burdened in debt because of the penalty that she was barely able to attend middle school.

“Returning the [one-child] penalty they collected from Zhu’s parents would be the best compensation,” another web user remarked, referring to the 20,000 yuan ($3,000) consolation fee given the family. Consolation fees are awarded by the local government to Olympic victors.

“The state demonstrates its political achievements and boosts its image by rewarding Olympic champions,” Ren Hai, a professor at Beijing Sports University, told the state news media China Youth Daily following the 2012 London Olympics. Chinese medalists, often from poor rural families, receive rewards worth hundreds of thousands of dollars, while those unable to make the cut are shamed and abandoned.

Zhu is not the only athlete to have survived institutionalized birth control. Cyclist Zhong Tianshi, a gold medal winner at the Rio Olympics, was a second child. According to the state-run China National Radio, Zhong’s family paid a 8,000 yuan fine (about $1,200) to give birth to her, a sum equivalent to four years of savings in 1990s China.