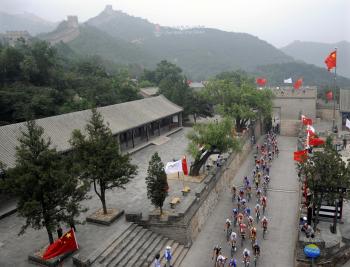 On the first day of Olympic events, Saturday August 9, the gruelling men’s Olympic road cycling race was decided amongst controversy for supporters.

It was not the pollution that some predicted would be a barrier to overcome during the endurance race, but the over-the-top security around the course.

Families were prevented from watching the event while cyclists were forced to ride their race without encouragement or cheering from traditional road-side supporters.

The riders battled the six hour race through excessive heat and humidity in total silence but fans and family members of competitors had a battle of their own to contend with – trying to penetrate the “ridiculous” security measures preventing them from watching the race.

Many argued with law enforcement officials but to no avail. A security barricade around the 23km racing circuit was impenetrable for most. Some took the law into their own hands.

Chiara Passerini, wife of Australian cyclist Cadel Evans, was fortunate to hold her vantage point within 500m of the race and was able to watch parts of the race, but at great risk.  She scaled a 10m wall to gain that position.

"We arrived here and the policeman didn't want us to stay, he wanted us to stay behind a fence, so we jumped on the other side of the fence and climbed up on this wall," Ms Passerini told Sydney’s Sun-Herald while watching the race.

Relatives of Australian racing champion, Matthew Lloyd, managed to work their way through the heavily guarded finishing line by bribing a security official. But his mother Barbara Lloyd was told to leave the area, because she was cheering too much, The Herald reported.

However others, many of whom had travelled from overseas, were left disappointed after getting a taste of communist authorities. They were forced to watch the race on television.

Australian rider Stuart O'Grady revealed his wife, Anne-Marie, flew from Australia to cheer her husband on, only to be stopped by security, and forced to watch the race indoors on the television.

"She didn't have a ticket, normally you don't need a ticket to watch the road race,'' he said. "She flew over here from Australia to watch it and watched it on TV."

"It was like silent murder,'' Stuart O'Grady said of the race via News.com.au

Although the race was initially advertised as free and public, it all changed last week when organisers decided to ban spectators.

This put the racing world into a difficult situation not knowing how to deal with family members and colleagues who had flown in from overseas to support their loved ones.

President of Cycling Australia, Mike Victor, said even he had to return to his hotel to watch the race.

"We could have seen more of the road race watching SBS in Australia,” he told The Herald.

The six hour race, in some of the most picturesque countryside, finished at the Great Wall but with not a spectator in sight.