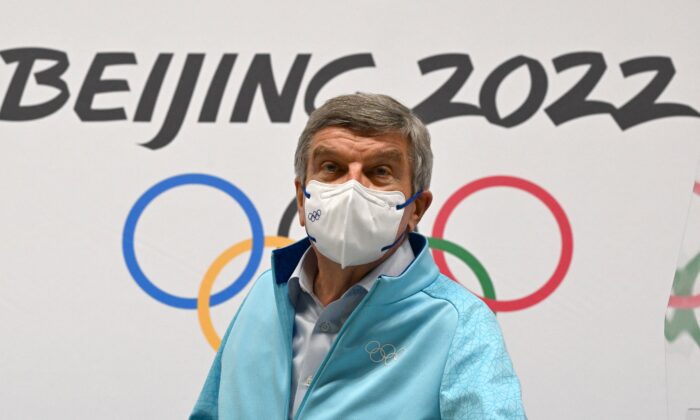 International Olympic Committee (IOC) President Thomas Bach issued a rare rebuke to Beijing organizers over comments about Taiwan and Xinjiang, as scrutiny of the Chinese regime’s abuses continues to simmer in the backdrop of the Winter Games.

Beijing needs to “remain politically neutral,” said Bach at a press conference on Feb. 18, a day after a Beijing Games representative declared that “there is only one China in the world,” in a reference to Taiwan. The official had also dismissed the regime’s repression in Xinjiang—the chief reason behind the diplomatic boycott of the Games staged by the United States and others—as a mere “lie.”

“So this problem we did not ignore,” said Bach when asked about the Chinese official’s statements.

“We were in touch with BOCOG immediately after this press conference,” he said, using the acronym for Beijing Organizing Committee for the Olympic Games. “And then, both organizations, BOCOG and the IOC, have restated their unequivocal commitment to remain politically neutral as it is required by the Olympic Charter.”

Even in its measured tone, Bach’s remarks were unusual given the IOC’s general reluctance to upset Beijing.

It came as Yan Jiarong, the Beijing Olympics spokesperson, broke off from the evasive stance Beijing officials had maintained for over two weeks on politically sensitive topics that it had said were outside the purview of the Games.

“There’s only one China in the world, and Taiwan is an inalienable part of China,” Yan said on Feb. 17 during the final regular briefing before the close of the Games on Sunday. The comments were made after IOC spokesperson Mark Adams gave an ambiguous response to a question about whether Taiwan would attend the closing ceremony.

Taiwan’s participation, Yan said, is an issue where “we really have to take a solemn position.”

The Chinese Communist Party has always claimed Taiwan, a self-ruled democratic island, as a Chinese province. The regime has been escalating its military intimidation of the territory, sending fighter jets toward the area on a frequent basis in recent months, an act triggering alarm about a potential military conflict in the region.

Taiwan competes at the Olympics and other international sports events as “Chinese Taipei” under Beijing’s insistence. While the island did not send government officials to the Games and wasn’t planning to have its athletes show up to the Olympic opening ceremony, it changed its decision upon the IOC’s insistence.

Yan also chimed in when IOC spokesman Adams was questioned if he was confident that athletes’ uniforms are not sourced from forced labor in Xinjiang, where over 1 million Uyghur Muslims are put in detention camps.

“The so-called forced labor in Xinjiang is a lie made up by deliberate groups,” she said, adding the oft-repeated line that the Chinese side was “against the politicization of sports.”

Adams responded that the uniforms supplied by Chinese sponsor Anta—which openly stated it uses Xinjiang cotton in its products—did not contain cotton, then dodged another question about whether the IOC is comfortable representing the brand that has potentially tainted products on the shelves.

“To be honest I’m not aware of those products that you’re talking about, but I’m sure I can have a look at them tomorrow,” Adams said, adding that the IOC was “very proud of our sponsor Anta.”

He was similarly equivocal when a reporter suggested that Yan herself had “politicized” the Games with the sovereignty claim over Taiwan, saying: “There are many views on all sorts of things around the world, but our job is to make sure the games take place and the magic of the games can happen.”

The Chinese official’s comments have “cast a shadow over the peaceful spirit embodied by the Olympic rings,” the Taiwanese foreign ministry said in a statement.

“I really think that yesterday’s press conference in a way told us everything that we needed to know about the players involved,” Sophie Richardson, China director for New York-based Human Rights Watch, said on Friday.

“The IOC comes out just looking absurd and pathetic and like denialists and the Chinese government looks like bullies.”

She made a particular note on Beijing’s choice to have a Uyghur athlete as a final torchbearer during the Opening Ceremony, which she said surprised her for all the regime’s “terrible” human rights violations and denial of wrongdoings.

“This is like a middle finger to the rest of the world—the government saying ‘I don’t care what you say, I do whatever I want to do.’”