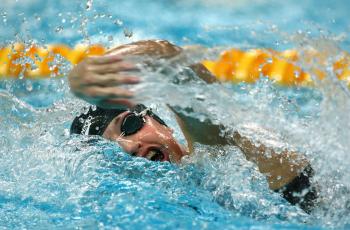 Melanie Nocher of Ireland competes in the Women's 200m Freestyle Heat 2 held at the National Aquatics Center on Day 3 of the Beijing 2008 Olympic Games on August 11, 2008 in Beijing, China. (Mike Hewitt/Getty Images)
US

By Sara Matheson
Print
One swimmer’s Olympic debut has been ruined after Olympic officials stripped the Irish swimming team of their shamrock-emblazoned caps.

Irish swimmer Melanie Nocher was devastated after her goggles filled with water when she dived into the pool during her 200m freestyle heat.

“I usually wear them inside. So I think that is what did it. This [cap] isn’t mine. So there was a bit of panic last night for hats. They have ordered new ones in but they couldn’t get them here for this race. I think they are here tomorrow,” she told the Irish Times on Tuesday.

Nocher finished a disappointing seventh in her first heat.

But Bewley later sent out a release to correct his first statement.

“‘Poolside Olympic officials at the swimming venue refused to let Andrew [Bree] wear his competition cap because of the size and number of the commercial logos on the item – not the shamrock symbol,” he said.

He said it was too late for the team to have new caps made, so they had to wear black caps instead.

Andrew Bree was the first Irish swimmer at the Water Cube to wear a black cap.

But Bree wore his white cap with the four-leaf clover symbol underneath the generic cap during Saturday’s 100m-breaststroke heat and revealed it after his race.

Bree did not qualify for the semi finals. He finished 30th out of 64 competitors, but still set an Irish record.

The International Olympic Committee has blamed Swim Ireland for the problem with the caps.

“Swim Ireland, who are responsible for swimming performance gear, were instructed on many occasions by the IOC that the swimming gear should be unbranded – and this requirement was accepted and agreed.

“Wherever possible, the International Olympic Committee encourages all nations to maximise their national identity on all Olympic clothing equipment and accessories.

“They particularly encourage the use of national colours and symbols,” the release said.