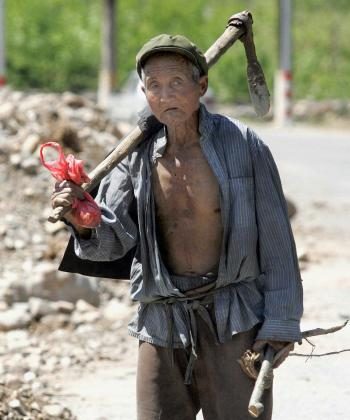 An elderly Chinese farmer in the outskirts of Beijing, 2007. (STR/AFP/Getty Images)
China

While Beijing boasts to be hosting the world’s most expansive Olympics, the lavish spending may never extend to the 300 million people living below the poverty line in China.

The current bill of the Beijing Games stands at a whopping $US40 billion—almost three times that of  Athens in 2004—which totalled a mere$15 billion.

Some 1875 tonnes of twisted steel moulded the Bird’s Nest, over 10,000 tonnes of sand was brought in, thousands of pot plants planted, railways built, and streets swept spotless, the cost of the Olympics could be felt in every corner of the city.

According to the 2007 World Bank report the number of poor has tripled in the world’s most populous nation, which continues to battle against a gaping rich-poor divide.

Given the huge size of the Chinese population, even a small change in the definition of poverty can produce widely different estimates, says the report.

"The difference between $1 and $2 a day income is a huge number of people, say 450 million people," said Khalid Malik, the resident representative of the United Nations Development Program, in Beijing, reported The International Herald Tribune.

According to China’s official figures, the minimal survival level is a mere $94 a year or just 25 cents a day. This is supposed to be enough to cover basic needs, including maintaining a daily diet of 2000 calories.

Poverty is most severe in China's remote central areas, dominated by ethnic minorities removed from the Beijing-Shanghai boom. The farmers live in dire conditions, where health risks are high, water polluted, air quality low and houses are derelict.

The World Health Organization (WHO) says that some 750,000 people die prematurely each year in China due to extremely poor air and water quality.

While recent attempts have been made to improve the poverty crisis, such as reducing grain tax, the people say authorities’ corruption eats away at the little benefit that may have transpired from the programme.

For many villagers, the central government is out of touch with rural realities in places like this, and the local government is filled with venal officials who shower spending intended for the rural poor on provincial towns and cities or simply take the money for themselves.

"Ordinary people don't get any real benefits from poverty alleviation programs," said Li Guangyi, 35, a farmer who lives in the village of Zhangyoufang, reported the International Herald Tribune.

"How could relief money get into our hands? It goes first toward relieving the local officials, who get rich on the tragedies of the nation."