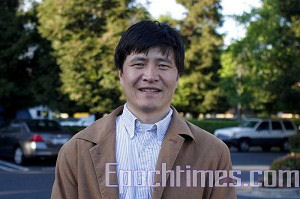 SAN FRANCISCO—Around 9:00 a.m on April 9, Mr. Zhou Fengsuo, a former student leader of the Tiananmen Democratic Movement in 1989, arrived at the relay's opening ceremony outside of AT&T Park with his friend Su. In the sea of red flags, they found another friend Mr Guo Ping, who arrived two and half hours earlier, when the site was quiet with few demonstrators.

Guo said those relay supporters around them arrived in large buses not long ago, mostly foreign Chinese students, organized under the name of several mainland compatriot associations, while the group besides them was from China's eastern Anhui Province.

Zhou said to The Epoch Times reporter, “The tension immediately grew, when another friend, Mr. Ma arrived and brought them T-shirts with the slogan 'Don't Forget the Tiananmen Massacre' and photo of Hu Jia, a rights activist who was recently sentenced in the mainland for “inciting subversion.”

The tension lead to conflict, when Zhou and Ma wanted to reason with their countrymen about the human rights abuses in China, and that the communist regime should not use the Olympics to cover up the massacre. “But they don't want to listen and called us 'Tibetan separatists,' 'betrayer' and 'not qualified to be Chinese,'” said Zhou.

Things grew even worse when the four protesters went to open a banner about the human rights abuses in China. Immediately, someone came up to grab their banner. When the police did not respond, the pro-Beijing supporters became even bolder. During the conflict, someone hit the back of Guo's head causing his head to bleed. Guo's wound did not awaken any sympathy from the people around him, and they continued to push him back and forth and wrap him with red flags. “It seems like the assembly of condemnation during the 'Cultural Revolution' period,” Zhou declared.

Zhou tried to push through the crowd because his friend Guo was getting away and disappeared in the red flags, but he saw a scene even more shocking, a group of pro-Beijing Chinese were beating a man, obviously a Chinese, who was trying to display a flag with the slogan “Let Justice Be Seen.”

By helping the guy, Zhou made himself a target also. “They called us 'American Dogs,' 'animal' and pushed and beat us.” “The spectators and police were in shock, until a Westerner passing-by shouted to them, 'Don't you know this is America!'” said Zhou.

According to reports in the San Francisco Chronicle and New York Times, several hours before the relay ceremony, the Chinese Consulate sent over a thousand supporters by bus, those people were mainly from the Bay area, and some even from Los Angeles.

And according to a source who wants to remain anonymous, the Chinese Consulate in San Francisco is treating the Olympic Torch Relay as their top political priority. Before the torch arrived, they had held several meetings with pro-Beijing groups and requested that they mobilize everyone possible to support the relay. The Consulate provided hotel accommodations for relay supporters from other cities.

Note: Zhou Fengsuo, was a fourth year student at Tsinghua University in Beijing during the Tiananmen Democratic Movement in 1989. He was among the first group of student leaders wanted by the regime after the massacre. After one year imprisonment, Zhou was released because of pressure from the United States. He arrived in America afterwards and devoted himself to China's human rights and democracy movement.