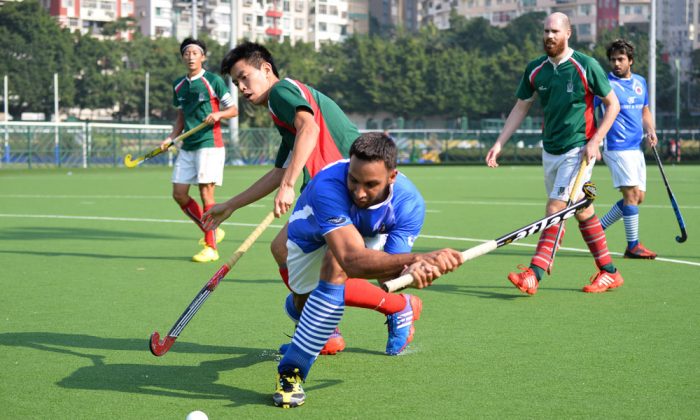 Canadian Olympian hockey player, Sukhwinder Singh Gabba representing Punjab-A hits a shot at goal during their match against KCC-A on Sunday Oct 27, 2013 at the Happy Valley Ground. Punjab-A won the match 3-1 to keep them equal top in the standings. (Bill Cox/Epoch Times)
International

The star players for Punjab-A brought out the crowds for the Hong Kong Hockey Association Premier matches played at Happy Valley on a lovely sunny Sunday afternoon Oct 27.

With King’s Park Hockey Ground now closed for resurfacing there was a full day of Premier Hockey at the Valley ground starting at 10.45 and going through to 5.30 in the afternoon. But it was the 2.15pm game that a lot of people came to watch to see how the newly arrived Olympic stars would perform.

Although Punjab were not playing their normal fast flashy hockey, to which we have become accustomed, no one was disappointed with the newcomers who showed some wonderful skills. What a great opportunity it was to see three Olympians in action here in Hong Kong.

But it was Canadian Olympian Sukhwinder Singh Gabbar that was the most impressive in the match. Playing up front he showed some great dribbling skills and some sharp shooting to end the match with a tally of two goals including one astonishing shot from an almost impossibly narrow angle.

Waseem Ahmad was solid in the midfield and also scored twice, blasting the ball past the goalie.

Sohail Abbas, playing in his normal defensive position, also impressed with his tackling and distribution skills. But people were a little disappointed that he did not convert from the two short corner opportunities presented.

It will of course take a little time for the team to meld together. Still a 4-1 win was a satisfactory win for Punjab.

KCC-A put up a good performance and were in no way overawed. Keeping Punjab down to four goals needed a lot of tackling and determination and KCC showed plenty of this—their goalie Kelson Wong did a great job in keeping out some sharp shots on goal.

Wong discussed the Punjab attack with the Epoch Times after the game.

“I tried to watch a few videos of Sahail before he got here. As we predicted, it depends whether they have a good injector [penalty corner taker] and a good trapper. They have a good flicker, but they did not have the things before that.

“In the first and only flick he had against me, I think he was just trying to see how I am and what I would do and maybe hope to creep in down the middle.

“I am glad we didn’t concede more short corners I guess. I am glad I got a clean sheet against him,” said Wong.

“In the first goal by Sukhwinder, I guess I was not warmed up well enough, not focussed enough. The second one was a screamer. I did not even see the ball as it went in. But that is the quality that you expect from an Olympian.

“I think our [KCC’s] consistency is getting better over the course of the season. Today we played 65 minutes of good hockey. We just got tired towards the end and we have one or two injuries and a couple out for business.”

Shaheen-A beat Elite-A 5-0 in the first match of the day, but it was by no means as one-sided as the score suggests. Elite played well particularly in the early stages of the match and kept the score down to 1-0 at half time, but gradually Shaheen-A got on top and came away worthy winners.

Valley-A, although under a fair amount of pressure, put up a good performance against Khalsa-A scoring first to a loud cheer from their supporters. Valley battled hard—being urged on by their coach Mark Kake—and although they lost 3-1, it was an exciting game that showed great spirit and determination.

KNS were delighted to record their first win in the Premier Division by beating a depleted PAK-A side 7-3, which lifted them off the bottom of the table.

Meanwhile at the Football Club ground, it was Hong Kong Football Club (HKFC) against Singh Sabha Sports Club (SSSC) with SSSC-A playing HKFC-B and SSSC-B against HKFC-A. Both ‘A’ teams came out on top with similar results: SSSC-A won 9-2; while HKFC-A won their match 10-0.

After four rounds the leaders are beginning to emerge: HKFC-A and Punjab-A are leading with 12-points; Khalsa-A and Shaheen-A both on 10-points; while SSSC-A have 9-points, but have played an extra match; Valley-A and SSSC-B are next in line on 6-points.

It will be interesting to see how the teams come out after having a week’s break from matches and if they have further refined some strategies now that they know their opponents better. The league will return with a full program on Nov 10.