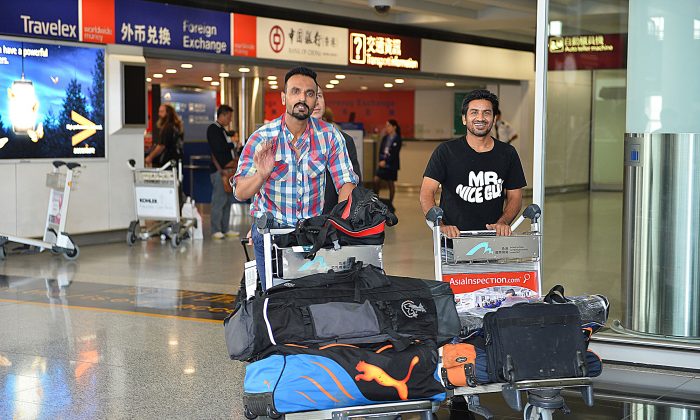 Sohail Abbas the World Record holder for number of goals scored in International Hockey arrived in Hong Kong at lunchtime on Sunday Oct 20 together with his fellow Pakistani Olympin Waseem Ahmad to join the Punjab Sports Club team in their quest to secure the top position in the Hong Kong Hockey Association Premier League.

Another Olympian, Canadian Sukhwinder Singh Gabber arrived in Hong Kong later on the same day also to join the Punjab team. The addition of these three world class players to the Hong Kong hockey scene will add a new dimension to Hong Kong hockey giving it a world-wide attention.

Sunny Bali, player, Captain and Team Manager of the Punjab Team explained to the Epoch Times that the Hong Kong Punjab Sports Club wants to play its part in developing the game of hockey in Hong Kong. The club only started playing hockey in Hong Kong in 2008 and it gained a place in the Hong Kong Hockey Association Premier League for the 2012-2013 season. They ended their first season in the top division in 2nd equal position – a significant accomplishment.

Punjab now want to go a step further to try to secure the Premier league title this year and if possible to also win the Holland Cup, played at the end of the season, Sunny Bali explained.

When asked about the new players’ commitment to playing in Hong Kong, Sunny Bali indicated the players would be here for a significant part of the season. He is also hoping for their continuing involvement.

He explained that the new players currently plan to be here for two months taking them through to mid December. It is likely that they will then take a break and return home for a few weeks coming back to Hong Kong in February 2014 to play in the last five or six matches of the league season and stay to compete in the Holland Cup.

Icing on the Cake

Sunny Bali also disclosed to the Epoch Times that another Pakistan Olympian Mudassar Ali Khan is planned arrive in a few days time to join the team. Assuming this occurs, this will be the first time four Olympians will have played for a hockey team in Hong Kong.

When the possibility of Abbas coming to Hong Kong was muted some weeks ago, Simon Chapman, coach of the Hong Kong Football Club Team commented to the Epoch Times “this would be great for Hockey in Hong Kong” but he also indicated some trepidation as to what this might mean for the other teams.

Sohail Abbas is known for his devastating drag-flick to score goals from penalty corners and and has been World record holder for goals scored in International Hockey since 2004.