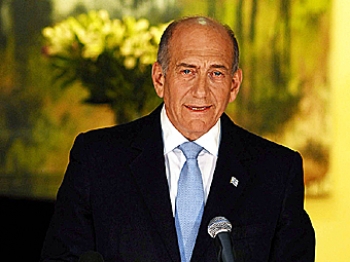 Olmert Stepping Down as Israeli PM

ISRAEL—Prime Minister Ehud Olmert announced Thursday evening that he not run in the ruling Kadima party primaries. In addition, Olmert said that following the election of a new Kadima Chairman, Olmert would resign as Prime Minister in order to allow the newly assigned Chairman to form another government quickly and efficiently.

“I believe that there is a wide base for such a government and it will be formed in a short time”, said Olmert.

After the Prime Minister’s resignation, the President would have to assign another Knesset member, most likely of the largest party, Kadima, to form a government. If the assigned Knesset member cannot succeed in forming a government within two months, new elections will be announced, and the current government will continue to perform its duties for another 90 days.

“The moment has arrived for me to make a decision,” said the outgoing Prime Minister in his speech.

“I am not doing this because I feel that I am incapable of doing my job”, said Olmert, adding he whole-heartedly believed in his ability to serve as Prime Minister.

Olmert said he wanted to act in the best interest of the Israeli people instead of focusing on his own private legal matter while in office; for the sake of the nation, he felt he had to resign.

“We have a wonderful country, like no other in the world”, said Olmert. ”I love it with all my heart and I am deeply thankful to all you Israeli citizens for giving me the privilege of working for you.”

Olmert also criticized what he called a campaign to defame him, referring to several investigations into his finances and behavior in office made by his political opponents. Olmert characterized the people instigating these investigations as “decent people who really care for the country and its future.”

In the past few years several accusations have been made that Olmert accepted bribes. These accusations reached a peak in the past few months with the Talansky case where it was alleged that Olmert received envelops filed with undeclared money. With prior testimony by Moshe Talansky, these allegation greatly harmed Olmert’s public image.

Olmert had to avoid answering to these allegations in public because his attorneys warned him that any public statements might damage his position during the trial.

The public turmoil surrounding these bribery allegations of misconduct created so much pressure that Olmert was finally forced to resign as prime Minister.

The Prime Minister was adamant in his innocence, which he said he would eventually prove.