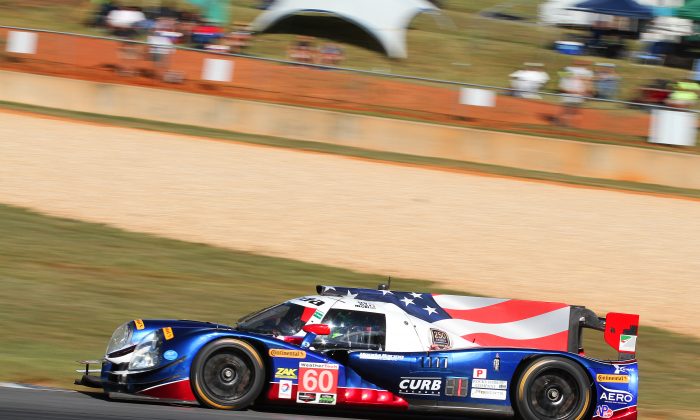 Dane Cameron in the #31 Action Express Coyote-Corvette qualified third ahead of Tom Long in the second Mazda prototype. Only these three were able to lap the ten-turn, 2.54-mile Road Atlanta course within a second of Pla’s time.

This is not to say that the rest of the field was slow. Of the nine prototypes entered, the #10 Wayne Taylor Racing Dallara-Corvette driven by Ricky Taylor was slowest, only 1.47 seconds off Pla’s pace.

Pla told IMSA.com, “From the beginning the team has done a great job. They gave me a very competitive car and we kept improving each time. I was expecting that more or less. The other things will come tomorrow.

“It will be a real possibility for the win. We have nothing to lose, we want to put on a good show for the fans and want to do a good job for John and for Michael [car owner and driver John Pew and team own Michael Shank] so we will go for it.”

Petit Le Mans is a ten-hour race, sole pole is more about bragging rights for the driver and crew than any advantage in the actual contest. Shank Racing has had several years of bitter misfortune, punctuated by a lucky win the 2012 Rolex 24, and will be retiring the #60 Ligier after Petit, so the team truly has nothing to lose—and if allthey win are those bragging rights, still they must seem exceptionally sweet.

GTLM: Less Than Three-Quarters of a Second

Competition in IMSA’s GT-Le Mans class is always fierce, but rarely does ti get closer that it did in qualifying for this year’s Petit Le Mans. The entire ten-car field lapped Road Atlanta within 0.73 of pole winner Richard Westbrook in the #67 Ford Chip Ganassi Racing Ford GT. Westbrook turned in a lap of 1:18.131 at 117 mph to take the class pole.

“Honestly it was a bit messy,” Westbrook told IMSA.com. “The conditions were completely different than P4, it was a lot cooler then.

“It’s so sensitive, we’ve seen before you can have a quicker car in the heat of the morning and then be slow during the heat of the day. We did the right thing on the setup and predicted it would be slower. We got the car just right. I’m just delighted.

Westbrook and co-driver Ryan Briscoe are locked in a battle for the GTLM drivers’ championship with Corvette Racing drivers Oliver Gavin and Tom Milner in the #4 C7.R. Corvette Racing will win the manufacturer’s title just by taking the green flag, but Westbrook trail by eleven points.

“All we can do is try and win the race. And we can put the pressure on the 4 car (Corvette). It’s a long shot, if we can just stay out front and see what happens,” Westbrook explained.

“It’s going to require some misfortune on their part, and with the championship season they’ve been having … Even if we don’t win the championship, Petit Le Mans is a great win to have straightaway.”

A Final IMSA Victory for Viper?

Jeroen Bleekemolen put the #3 Riley Motorsports Dodge Viper GT3-R on the GT-Daytona pole with a lap of 1:21.305 at 112.4 mph. It seemed fitting that this car, which will be retired from IMSA racing after Petit, should win pole on its last foray.

A crowd favorite, the car saw success in its first season, winning the championship, but still fell victim to corporate downsizing when Fiat took over Chrysler Dodge. Car owner and co-driver Ben Keating basically campaigned the car out of pocket, through his company ViperExchange.com and with support from Gas Money Garages.

“It was good to give the Viper a great farewell in the last international sports car race qualifying,” Bleekemolen said afterwards. “It wasn’t the toughest qualifying I’ve done. The car was great. I just kept pushing on the car. I pulled out a good lap and now we can focus on tomorrow.”

Bleekemolen beat out a pair of Porsches to take the pole. Park Place Porsche driver Matthew McMurry was 36 hundredths slower than Bleekemolen in his #73 911 GT3 R. Mario Farnbacher in the #23 Team Seattle/Alex Job Heart of Racing GT3-R was a further .133 back.

PR1/Mathiasen Motorsports driver Robert Alon topped the Prototype Challenge class with a lap of 1:16.411 at 119.6 mph in the team’s #52 Oreca-Chevrolet, beating out Alex Popow in the #8 Starworks Oreca and Johnny Mowlem in the similar #20 BAR1 Motorsports Car.

“Honestly I think we had a really good car,” Alon said. “It felt good. All I had to do was put my head down and do what I had to do and the car did the rest.

“It definitely started getting greasy out there about half way through the run. I think the fast lap was somewhere in the middle of my session so that’s probably why it was so fast.”

Petit Le Mans at Road Atlanta, takes the green flag at 11:10 a.m. on Saturday, Oct. 1. The race will be broadcast on Fox Go, IMSA TV at IMSA.com, and in part on Fox Sports 1 and Fox Sports 2. Check local listings for more details.

Live Timing and Scoring as well as audio coverage by IMSA radio will be available at IMSA.com.