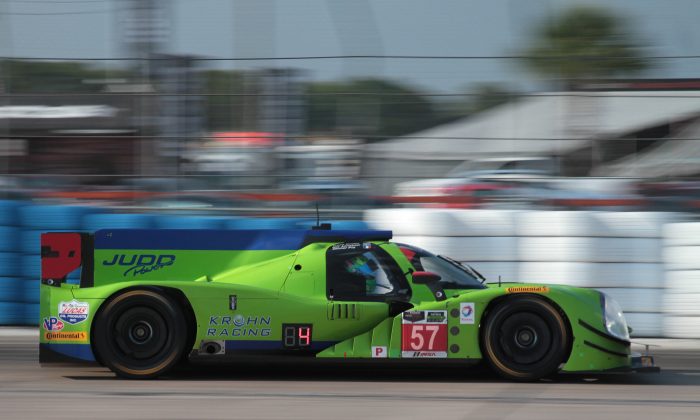 The Krohn Racing #57 Ligier-Judd JS P2 was the quickest car on track in the Thursday afternoon and Thursday night practice sessions—quite a surprise after a rather disappointing performance at Daytona in January, where the car retired after six hours..

The Krohn engineers apparently found the secret formula for Sebring; the car was fourth fastest Thursday morning and just got faster.

“We were very strong in all the sessions yesterday and we knew going into qualifying that we had a very strong package, a very good car. We have been working at it,” Olivier Pla said after the qualifying session.

Pla went out early and set a very fast time, then ran wide at Turn Seven and had to take a few laps to clean his tires. He got a call from the pits as the session wound down telling him to go for it; he responded by taking the pole and setting a new qualifying record.

“I am looking forward to the race tomorrow,” he said. “For sure it is going to be a difficult one.”

“Olly did a fantastic job with the car today. If you watched it, it looks a little loose—he drives it quite well that way; me, not so much,” team owner Tracy Krohn said, laughing a bit ruefully. Krohn, who co-drives with Pla and Nic Jonsson, went off the rod a few times in the morning practice session.

Krohn tired t explain how he had switched the team unexpectedly from a GTE Ferrari to a Prototype-class Ligier.

“We’ve made a lot of changes over the last 18 to 24 months. We’ve spent a lot of time testing here. Jacques Nicolet and Onroak Racing [makers of the Ligier chassis] did an excellent job getting the chassis to us on time and on budget.

The car has been very good in testing and very good here all week. It’s been a long dry spell, so we are very pleased to be on the pole.”

Krohn racing scored a GTE-Am class win at Sebring in 20011, and hasn’t had much luck since then. Judging from the results of practice and qualifying, the team has finally found a package that works.

The pace of the Ligier-Judd could offer a serious challenge to the ordinary front-runners at Sebring. The #57 was quickest in the afternoon when the track was hottest and slipperiest, and also in the night session, when conditions were just the opposite.

With Saturday forecast to be in the low- to mid-eighties, and the race ending with three hours of total darkness, it would seem the Krohn Ligier has the best set-up for most of the race.

Pla addressed the fact that qualifying is not the most important part of a 12-hour race.

“It’s always nice to start from pole, especially winning the pole at Sebring, but 12 hours is a different story,” Pla acknowledged. I have done this race three times and it was never easy. A lot of things can happen; it is a very demanding track.

Martin Plowman in the #16 Bar1 Motorsport Oreca-Chevrolet with a last-lap desperation effort, bumping Colin Braun in thr #54 Core Autosport Oreca by seven hundredths of a second.

Plowman got the call to drive for Bar1 nine days before the race.

“It was a very difficult session,” Plowman told IMSA.com. “The cars are very difficult to drive. I told the team as long as they give me a fast car, I’ll hustle it around and I’ll get a good result.

“This is a very competitive class. Any time you can beat Colin Braun and the Core Autosport car, you know you’re having a good day. Today when the car was at its peak, I hit every apex and the time appeared out of nowhere.”

Tickets for the Tudor Championship 63rd 12 Hours of Sebring are available at the gate or via the Sebring Raceway website.

The race will also be televised and streamed in its entirety. The first two hours will be broadcast on Fox Sports 1, starting at 10:30 a.m. EDT Saturday, March 21. From 12:30 p.m. until 7 at night the race will be on Fox Sports 2; then it moves to the Internet on IMSA.com.

Fox Sports Two picks up the action at 10 p.m. and broadcasts the end of the race and winners’ interviews.
Finally, a two-hour summary will air on Fox Sports 1 at 8:30 am on Sunday, March 22.