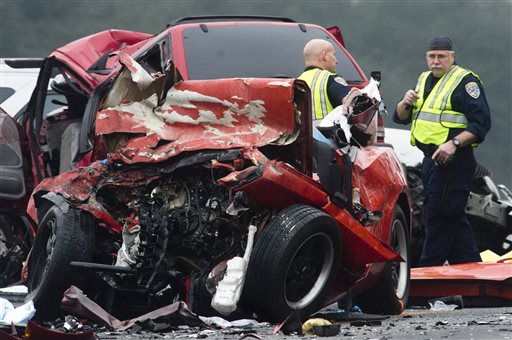 Officials investigate the scene of a multiple vehicle accident where six people were killed on the westbound Pomona Freeway in Diamond Bar, Calif., on Sunday morning, Feb. 9, 2014. Authorities say four members of a family have been killed in the wrong-way freeway crash that also took the life of two others, including the sister of a woman arrested on suspicion of drunken driving. (AP Photo/San Gabriel Valley Tribune,Watchara Phomicinda)
Crime and Incidents

Olivia Carolee Culbreath, named as the suspect who caused a crash that killed six people, including her sister, has a previous conviction for driving under the influence of alcohol.

Culbreath was 17 when she was convicted of driving drunk, reported the LA Times.

She also had two other unidentified traffic violations after the convictions.

The restrictions on her license were lifted only last week.

Officials believe Culbreath was drunk when she drove her 2013 Camaro east on westbound 60 Freeway, also known as the Pomona Freeway.

She crashed into a vehicle while traveling as fast as 100 miles per hour.

Besides killing her sister Maya Louise Culbreath, and another passenger in her vehicle, Kristin Melissa Young, both 24, the crash killed four members of a family.

Two people in a Ford Explorer — Gregorio Mejia-Martinez, 47, and Ester Delgado — died at the scene of Sunday’s early morning crash on State Route 60, said Los Angeles County coroner’s Lt. Fred Corral. Two other family members in the SUV — Leticia Ibarra, 42, and Jessica Jasmine Mejia, 20 — were declared dead at a hospital. All four were from Huntington Park.

Olivia Culbreath remained hospitalized in serious condition and was being treated for a broken femur and a ruptured bladder. Meanwhile, investigators were seeking witnesses after the speeding Camaro careened the wrong way down the freeway, causing the violent crash.

Culbreath was arrested after being pulled from the badly mangled Camaro, CHP Officer Rodrigo Jimenez said.

Jimenez said the crash scene in Diamond Bar, a suburb east of Los Angeles, was horrific. Three people were ejected from their cars and the Camaro was barely recognizable.

Authorities said Culbreath was traveling north in the southbound lanes of State Route 57 before transitioning east in the westbound lanes where the Camaro collided head-on with the Ford Explorer. A Ford Freestyle then collided with the Explorer.

Witnesses told dispatchers the Camaro was speeding up to 100 mph, he said.

The driver of the Ford Freestyle suffered minor injuries.

A cellphone number associated with her was disconnected.