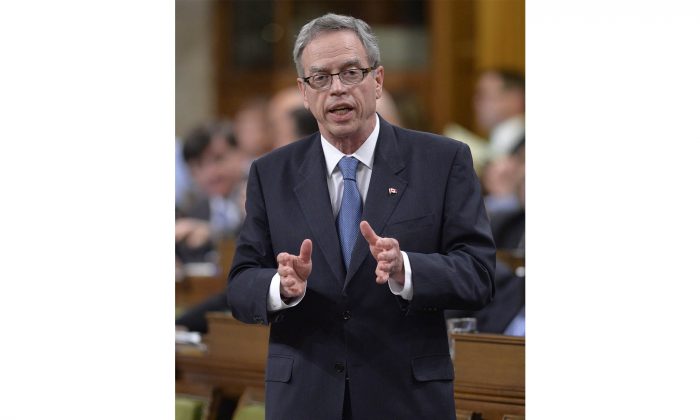 Finance Minister Joe Oliver responds to a question during question period in the House of Commons on in Ottawa on June 9, 2014. Oliver wants provincial governments to continue reducing deficits. (The Canadian Press/Sean Kilpatrick)
Canada

MONTREAL—Finance Minister Joe Oliver says he’s concerned that provincial governments and Canada’s global allies will reverse five years of gains since the 2008-2009 recession by taking the pedal off efforts to cut budgetary deficits and debt.

The minister reminded an international economic conference that Canada will post a $6 billion surplus in 2015-2016, but said the average budgetary deficit among G7 countries is 5.9 percent of gross domestic product.

Oliver applauded Quebec’s recent restraint budget and, on the eve of an Ontario election, called on that province to make a similar move.

“No matter which party wins the election, I will encourage the new government to make a serious commitment to growth and a balanced budget,” he said on June 9.

Oliver later told reporters that facts need to be recognized: “Canada cannot arrive at its potential if the biggest province remains in difficulty.”

He said the eventual rise in interest rates and potential downgrades by credit rating agencies will cause debt payment costs to balloon.

“These are inescapable mathematical calculations. It’s about arithmetic.”

However, the minister said he is not concerned that fiscal restraint by the two largest provinces will provoke a national economic slowdown, saying “acting responsibly” won’t be a drag.

He said the world is at a “pivotal moment” for the global economy where recovery remains weak and the outlook is uncertain.

But in uncertain times, Oliver said it is essential that governments achieve a solid fiscal grounding by focusing on “strong, sustainable, and balanced growth.”

The G20 will discuss this fall, Canada’s proposal to increase the GDP of the member countries by 2 percent above current trends, a “game-changer” that would add $2 trillion to the global economy.

The former natural resources minister used the meeting to pitch to more than 3,000 delegates the large oil and natural gas reserves in Western Canada—168 billion barrels of proven oil reserves and 37 trillion cubic metres of natural gas—that can be exported to Europe and Asia, if Canadian pipelines are built.

He said the resource sector accounts for 18 percent of the Canadian economy, contributing two million jobs and $30 billion in government revenues. But the oil is landlocked, causing Canadian oil to sell at a discount to the world price, costing the economy $30 billion.

“Canadians need to understand the consequences of not moving our resources to tidewater,” he said, accusing opponents including opposition political parties of making up their minds before regulators provide “objective recommendations.”

“So the choice is stark. Head down the path of economic decline, higher unemployment, limited funds for social programs like health care, continuing deficits, and growing debt, or achieve prosperity and security now and for future generations through the responsible development of our resources.”

However, Oliver declined to say if the cabinet will soon approve the Northern Gateway project that would allow oil to be exported from British Columbia to Asian markets.