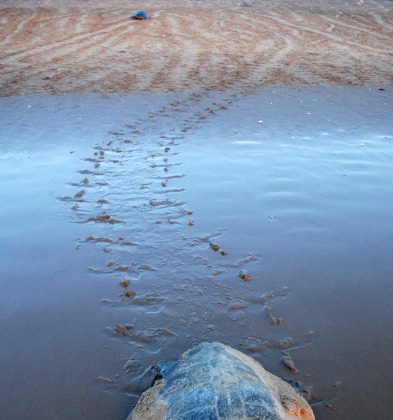 In this photograph taken on March 8, 2011, an Olive Ridley Turtle returns to the sea covered in sand after laying eggs on Rushikulya Beach, some 140 kilometres (88 miles) south-west of Bhubaneshwar. ((STRDEL/AFP/Getty Images)
Environment

Its ‘Arribada’ time on the East coast of India. Every year hundreds and thousands of Endangered Olive ridley turtles swim across miles of oceans to reach the beaches of Orissa, West Bengal, Andhra Pradesh and Puducherry to lay eggs and bring the next generation into the world at the same places where they were once born. Although Orissa has the largest nesting sites of these turtles in the world, this year, Puducherry too has set an example by caring for the few turtles coming to their beaches and ensuring that most hatchlings make it safely to the sea.

Every year, dozens of turtles choose the shores of east coast including Puducherry to lay their eggs and female turtles usually turn up at the same beaches to nest where they came into the world. The eggs are laid in conical pits, about one and a half feet deep in the sand which they dig with their hind flippers; in the middle of the night.

It is a tough fight for survival for these turtles bearing their olive-green shells(carapaces) Among those few hundred eggs that hatch, it is only a few that will make it to adulthood. But those few survivors will come back seeking the same shores to lay their eggs.

Unfortunately, human interference over the past few years has led to hundreds of theses eggs not even making it to the hatchling stage, with local villagers and poachers stealing the eggs and eating them.

This year the forest department has sought the help of villagers in Puducherry to identify and safeguard the eggs.

With prompt reporting from the villagers, in the course of this laying season, the forest department was able to collect 760 turtle eggs from six sites, including one in Kalapet and several in Narambai and Nallavadu. These eggs were then relocated to temporary hatcheries in Nallavadu and Narambai.

“Along with a 24-hour guard used by the Department, the local villagers have also been contacted to ensure that the eggs are safe,” said Deputy Conservator of Forests P. Sathyamurthy.

Each village has four or five such volunteers who call and give information on eggs, nesting sites or even dead turtles. It is this effective cooperation of locals with the Forest Department that has made a huge difference for the turtles.

“There are around four or five people in each village that call and give information. The bulk of tip offs, however, comes from Subbarayar from Narambai and Thirumal from Nallavadu. Additionally, the villagers on the Kalapet side also call in to report a dead turtle or a site with eggs,” Valumani from the Forest Department, who has been coordinating with the villagers, said.

This is the first year that there has been so much cooperation from the villages.

“Till last year, the villagers would either not report the eggs, or just eat them, but this year, they have taken a real effort to inform the Department,” said Mr.SathyaMurthy.

Spreading awareness among locals has been a real life-saver for the turtles.

A local from Narambai says “We had no idea that a turtle laying eggs was such a big issue, but now we realise what a blessing it is for us to get turtles on our beaches. This is why we have decided to inform the department rather than allow someone to steal the eggs.”

The Forest Department also gets some help from the fishermen in determining the most likely time of the turtle landings on the shore.

Interaction between humans and animals turn ugly many times when locals are not ready to relent to the needs of basic survival of the animal species. But this example set by Puducherry villagers clearly shows that it doesn’t have to be a violent and difficult end every time. More awareness and better coordination at ground level can create more support for species conservation.

This article was originally posted by Ramya Naresh, a contributing writer for www.indiasendangered.com