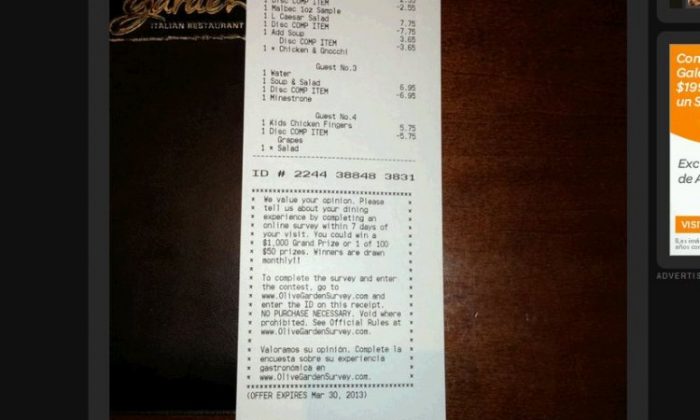 An Imgur screenshot shows the receipt. (Screenshot via The Epoch Times)
Social Media

Reddit erupted into a debate Wednesday after a man posted an account that there are still good people left in the world when Olive Garden gave the him and his family a free meal after their house burned down.

Redditor Tanek42 wrote: “My brother, wife, 3-year-old daughter and I went to Olive Garden after a recent house fire at my parents. When the manager asked how everything was, my daughter said, ‘Grandpa’s house burned down.’ Here’s how we received the check.”

He included a photo of a check that had a balance of $0.00. Some other Redditors posted inspirational accounts of kind deeds.

One person posted: “That Olive Garden receipt is fake; it’s free advertising. I know because I work in advertising and have spoken to the people who plan these campaigns,” to which Tanek42 replied, “Wow!”

Many Redditors assumed that the post was “/r/hailcorporate material,” which are posts that are intended to secretly promote corporations through the website. Some assumed that he posted the Olive Garden account to promote the restaurant, while some claimed he posted it to gain upvotes for his Reddit account.

“Why does it say ‘Duplicate Receipt – Stored Order’ at the bottom? Is this an indication that this is a copy of the receipt, and it may be the manager posting this?” another user asked.

Another said, “I thought the same. I work in retail and only when staff reprint receipts does the ‘Duplicate Receipt’ message appear. As I give customers the original receipt, I have rarely had to give one a duplicate receipt.”

A Reddit moderator, bitcrunch, said that after looking into the receipt post, they were perplexed that Tanek42 was getting so much hate.

“Some poor person is going to get home from work and find the entire internet has decided to burn him at the stake,” bitcrunch wrote in part.

The next day, the original poster was suprised with the response.

“Holy cow! I went to bed last night and was not really expecting this big of a response. There’s a lot of hatred out there, I can’t even believe some of the messages I received,” Tanek42 wrote.