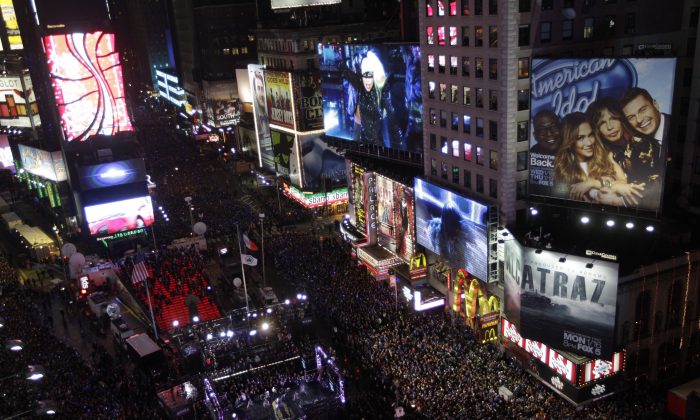 The Olive Garden location in Times Square in New York City is charging people $400 for entrance on New Year’s Eve.

The payment gives people access to the party planned that evening, which includes a buffet, an open bar, and a DJ.

However, people hoping for a good view of the ball dropping will be disappointed.

“It’s a limited view,” Michael Garver, a manager of the eatery at 47th Street and Broadway, told the New York Post.

But Jessica Parkin, who attended the 2014 celebration with friends, said it’s worth it, noting there were a “load of people desperately trying” to scalp the group’s tickets.

“Through the window you could see the crowds stood in the freezing cold and we felt extremely pleased that we were in the warmth!”

Have money to burn on New Year’s Eve? You could spend up to $1,000 to eat dinner in Times Square at places like Ruby Tuesday, Olive Garden and Bubba Gump Shrimp Co. Restaurants, Inc..

Ashton Edwards added on Facebook that she and a companion went a few years ago with some friends and “IT WAS SO WORTH IT!”

“Food, drinks, inside out of the cold, tables with seats, bathrooms, your own private area to watch the ball drop… if you’re doing New Years in Times Square, THIS IS THE WAY TO GO!” she said.

“And if you know me, you know Olive Garden is NOT my favorite. But this is one of the best ways to do it ‪#‎NoCrowds‬.”

For a better view, though, people need to be prepared to pay more.

Bubba Gump Shrimp on Broadway is charging $799 a person.

Some venues–such as Ruby Tuesday–have no view of the ball. The Times Square location is charging $349 to $850 per person.