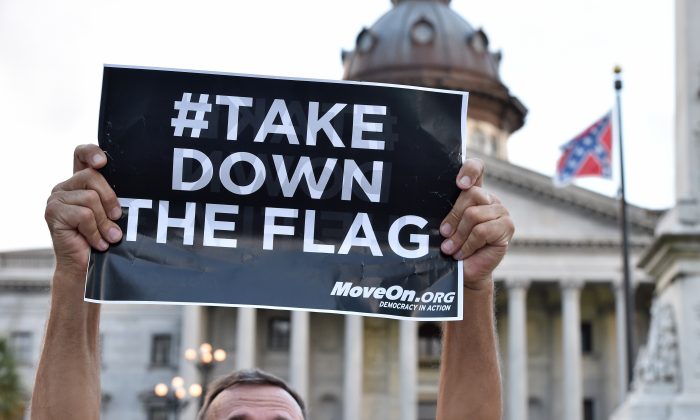 Hundreds of people gather for a protest rally against the Confederate flag in Columbia, South Carolina.(Mladen Antonov/AFP/Getty Images)
US

JACKSON, Miss.—The University of Mississippi has removed the state flag on its Oxford campus Monday morning because the banner contains the Confederate battle emblem, which some see as a painful reminder of slavery and segregation.

Interim Chancellor Morris Stocks ordered the flag lowered and said it was being sent to the university’s archives.

The action came days after the student senate, the faculty senate and other groups adopted a student-led resolution calling for removal of the banner from campus.

“As Mississippi’s flagship university, we have a deep love and respect for our state,” Stocks said in a statement Monday. “Because the flag remains Mississippi’s official banner, this was a hard decision. I understand the flag represents tradition and honor to some. But to others, the flag means that some members of the Ole Miss family are not welcomed or valued.”

Since 1894, the Mississippi flag has had the Confederate battle emblem in the upper left corner — a blue X with 13 white stars, over a field of red. Residents chose to keep the flag during a 2001 statewide vote.

However, the public display of Confederate symbols has been subject to heated debates since the June massacre of nine black worshippers at a church in Charleston, South Carolina. Police said the attack was racially motivated. The white man charged in the slayings had posed with a Confederate battle flag in photos posted online before the massacre.

More than 200 people took part in a remove-the-flag rally Oct. 16 on the Oxford campus. It was sponsored by the university chapter of the NAACP.

The University of Mississippi has struggled with Old South symbolism for decades. In 1962, deadly riots broke out when James Meredith was enrolled as the first black student, under court order. Ole Miss administrators have tried to distance the school from Confederate symbols. Sports teams are still called the Rebels, but the university several years ago retired the Colonel Rebel mascot — a white-haired old man some thought resembled a plantation owner. The university also banned sticks in the football stadium nearly 20 years ago, which eliminated most Confederate battle flags that fans carried.

“The University of Mississippi community came to the realization years ago that the Confederate battle flag did not represent many of our core values, such as civility and respect for others,” Stocks said in the statement Monday. “Since that time, we have become a stronger and better university. We join other leaders in our state who are calling for a change in the state flag.”