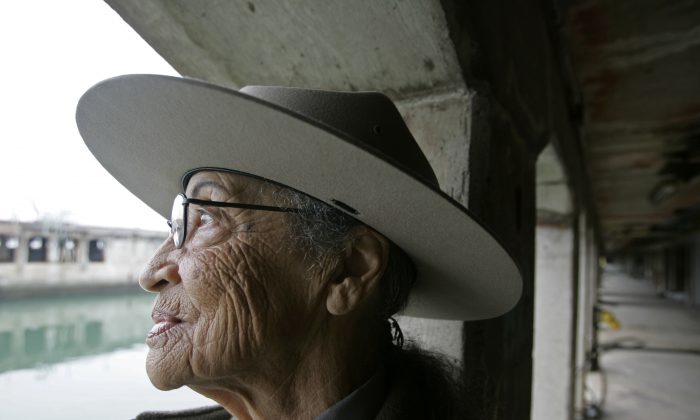 FILE - This Oct. 31, 2007 file photo Betty Reid Soskin, a community outreach worker at the Rosie the Riveter/World War II Home Front National Historic Park, looks out at the water from a dry dock area where woman worked during the war in Richmond, Calif. Authorities say a robber attacked Soskin, the nation's oldest full-time park ranger in her San Francisco Bay Area home and made off with a coin she received from President Barack Obama. Richmond police say 94-year-old Soskin was awoken around midnight Monday, June 25, by an intruder who punched her several times in the face. He dragged her out of the bedroom and beat her again. (AP Photo/Eric Risberg,File)
US

Oldest US Park Ranger Back at Work After Thief Steals Coin

RICHMOND, Calif.—The nation’s oldest full-time park ranger was greeted with cheers and hugs Tuesday when she returned to work three weeks after an assailant attacked and robbed her in her San Francisco Bay Area home.

“I wanted to get back into routine life,” the smiling Soskin told KNTV (http://bit.ly/29MMiMT). “I didn’t think there was any way to prepare myself for this moment. It’s so good to see you all and feel the support of the community.”

Police said an intruder punched Soskin repeatedly in the head and made off with items including a cellphone, laptop and jewelry on June 27.

The thief also took a coin Soskin received from President Barack Obama when she introduced him at last year’s National Christmas Tree lighting ceremony at the White House.

Soskin called the encounter terrifying and said the blows split open her lips.

The attacker hasn’t been caught.

Park Superintendent Tom Leatherman said he received an email from Secretary of the Interior Sally Jewell, informing him that the White House planned to replace the stolen coin.

Soskin’s colleagues and members of the community raised more than $50,000 to help her replace the other items and fund a documentary being made about her, according to the National Park Service.

Soskin became a ranger about 10 years ago and leads tours at the historical California park and museum honoring women who worked in factories during wartime.

She made headlines at the tree-lighting ceremony and in 2013 when she complained about a government furlough, saying she didn’t have time to waste sitting at home at her age.