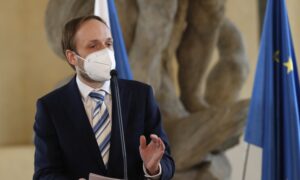 Oldest tortoise dies: The oldest tortoise in Britain, aged 130, died this week after it was bitten by a rat, according to reports.

Thomas was put down by its owner, June Le Gallez, after the rat bite became infected, reported The Express publication.

“We are very upset-­distraught actually,” Le Gallez told the paper. “Thomas was like a member of the family. He was bitten on the leg by a rogue rat in the garden and the wound became so inflamed that it started pushing into his shell.”

She added: “He wasn’t eating or appearing to get any better, so a week later, as a family, we made the decision to put him to sleep.”

Le Gallez inherited the tortoise, which survived two World Wars and six monarchs, around 35 years ago from her cousin.

According to the Daily Mail, Thomas was born in 1882, the same year that Charles Darwin died.

“For over 30 years the tortoises have roamed free in the garden and nothing has happened,” Le Gallez told the Mail. “It’s such a shame for him to go this way. Thomas has been through so much.”