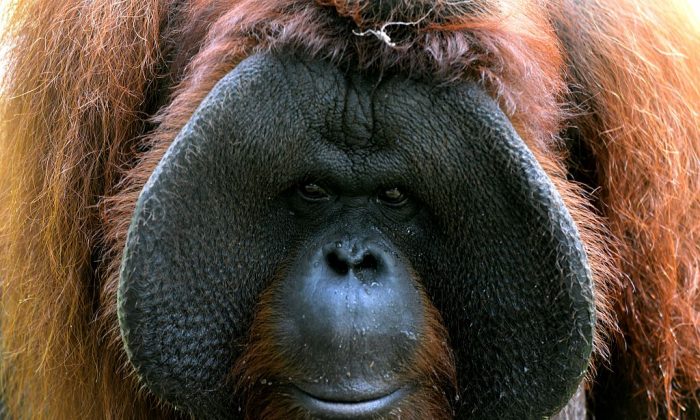 An orangutan from Borneo. (SONNY TUMBELAKA/AFP/Getty Images)
US

The oldest male orangutan in North America has died. He died on Aug. 26 of heart failure at the Toledo Zoo.

His name was J.J., short for Jiggs Junior, and he was a cross between the world’s only two orangutan types. He had combination Sumatran and Bornean orangutan heritage.

He suffered from heart disease and arthritis. He died when he was put under anesthesia by doctors intending to treat his heart condition.

J.J. was known for his love of watching football, and “The Price is Right” episodes, but only when Bob Barker was hosting. Staff would even fetch old episodes of the show so he could keep watching the pre-Drew Carey episodes, as People reported.

“He was an incredible ambassador for his species and will be dearly missed,” said Toledo Zoo CEO and Executive Director Jeff Sailer, to Toledo’s The Blade. “Our thoughts go out to all who loved J.J., especially to his keepers, who cared for him just like a member of their own family for so many years.”

He died while in the care of a cardiologist, pulmonologist, and anesthesiologist from the University of Toledo Medical Center. A team watching J.J. felt that the diagnostic evaluation was worth the potential risks if it could find any solutions to relieve discomfort in the orangutan.

“As soon as he went under anesthesia, he went into cardiac arrest and passed,” said Dr. Ric Berlinski, the zoo’s chief veterinarian.

J.J. was also regularly undergoing physical therapy for an arthritic condition in his lower back. Berlinski said the arthritis prevented J.J. from moving around too much and overworking his heart.
“Given the significance of his disease, that acted as a saving grace,” said Dr. Berlinski. “It self-limited his activity.”

Although J.J. was a loner, similar to male orangutans in the wild, he always loved interacting with visitors to the orangutan exhibit. Around spring, he prefered to stay in the off-exhibit living space, isolating himself more. The last month or two of his life he rarely stepped out.

“He started having issues in March, so it was sporadic at that point that he’d go out,” said zookeeper Suzanne Husband, who watched over J.J. for 30 years. “He wasn’t his normal, interactive self and we knew something was happening. Unfortunately he couldn’t tell us, and we couldn’t just keep letting him decline.”