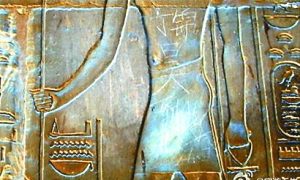 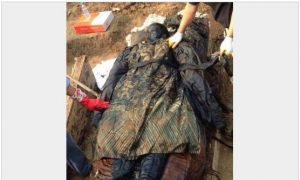 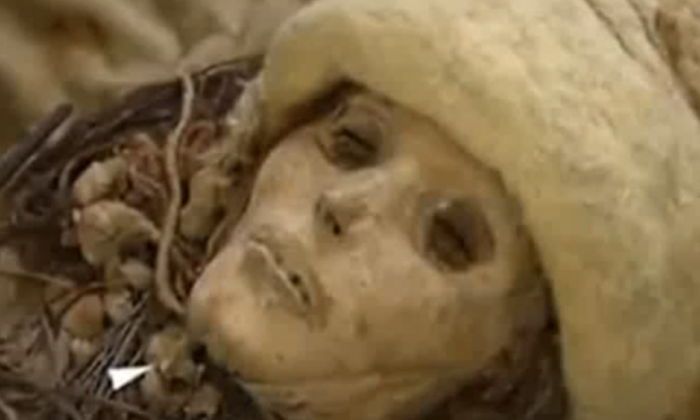 Screenshot with arrows pointing to where some of the cheese lumps were found on an ancient mummy from north-west China. (Screenshot/YouTube)
China

Scientists have identified yellowish lumps from tombs in north-west China as cheese that is about 3,600 years old, they say.

Archeologists from Germany and China sampled the material, which was collected from 10 graves and mummies at the Xiaohe cemetery in the Taklamakan Desert in Xinjiang.

Chemical analysis of the proteins revealed that the lumps were kefir cheese, dating as far back as 1615 B.C. They may have been intended as a tribute to the dead or food for the afterlife.

The bronze-age burial site was discovered early last century, and contained more than 30 corpses, known as the Taklamakan mummies. They are thought to have originated from Caucasian people who ended up in China, and may have brought the knowledge of milk fermentation with them.

One of the bodies belonged to a young woman, nicknamed the Beauty of Xiaohe, and experts say she is so well-preserved that it appears she could have died only recently. Some of the kefir cheese was found around her neck and chest.

According to the research team, these are the oldest known cheese specimens in the world. They are predated, however, by possible evidence of cheese-making from up to 8,000 years ago, as ancient residues of milk fat have been found on pottery from northern Europe and Turkey.

The findings were published in the Journal of Archeological Science.