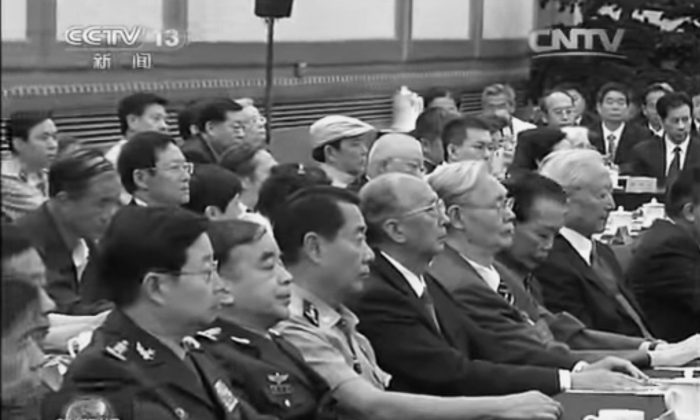 The sons and daughters of a previous generation of officials, including Liu Yuan, in short sleeves, attended the Party meeting on the 110th anniversary of Party patriarch Deng Xiaoping's birth on Aug. 20. But retired officials, including Hu Jintao and Jiang Zemin, were nowhere to be found. (Screenshot via CCTV)
China

Older Officials Not Invited to the Party, Excluded From Deng Anniversary

They’re called “yuanlao” in Chinese: retired Party leaders who retain influence over contemporary politics. It’s a tradition dating back to the first generation of the Chinese Communist Party, because each leadership group is reluctant to have the newcomers overshadow their own legacy.

Retired Party leaders often turn up at major Party events, but all men of this sort were notably absent from the 110th anniversary of the birth of Deng Xiaoping, a large Party confab held on Aug. 20. Analysts of the Chinese Communist Party have thus begun to wonder whether the era of the yuanlao interfering in the following generation has come to an end.

Deng Xiaoping was born on Aug. 22, 1904. A symposium dedicated to his life was held on Aug. 20 in the Great Hall of the People in Beijing (it was not held on Aug. 22 because Xi Jinping, the Party chief, was scheduled for a trip to Mongolia from Aug. 21 to 22).

Alongside Xi, in attendance were members of the Politburo, the Secretariat of the Chinese Communist Party Central Committee, members of the Central Military Commission and senior officials in the Party’s two auxiliary governance mechanisms, the National People’s Congress and the Chinese People’s Political Consultative Conference.

Like Xi, these young people are the children of the CCP’s founding generation. Their inclusion is a way of rehabilitating pride in the Party’s origins while simultaneously reminding everyone of Xi’s own descent from the founders.

In addition, the inclusion of Hu Deping advances Xi’s unofficial rehabilitation of Hu Yaobang. The former reformist head of the Party was removed from office by Deng, and died while under house arrest.

Initial signs that the era of the yuanlao was coming to an end came during the leadership transition from Hu Jintao to Xi Jinping in late 2012 and early 2013.

During the Communist Party’s 18th National Congress held in November 2012, along with handing his post as General Secretary of the Party, Hu also abdicated his position as Chairman of the Central Military Commission.

There had previously been two instances where the top leader—first Deng, and then Jiang Zemin—stayed on as head of the CMC some time after handing over the General Secretaryship.

Jiang handed over the reigns of the Party to Hu Jintao in late 2002, but stayed on as secretary of the CMC into 2004. And even after he left, he maintained an office in the CMC and would still hold meetings with military generals.

While the early years of Jiang Zemin’s rule were overshadowed by Deng Xiaoping’s policies, much of the era of Hu Jintao had difficulty escaping the personalities, policy decisions, and structures of governance established by Jiang.

A famous example of Jiang’s high-profile meddling was his appearance right alongside Hu Jintao during the Beijing Olympics in 2008. The order of appearance in photographs in communist China is supposed to be determined strictly by order of position—and in 2008, Jiang had occupied no official post for four years.

All this began to shift with Hu’s clean break in late 2012. Hu is rumoured to have penned a letter to the top leadership, no doubt also seen by Jiang, which declared that he hoped with his resignation that the era of retired officials interfering in politics would come to an end.

Wen Jiabao, the premier during the Hu era, also made a point of departing cleanly: on March 7, 2013, the date of handover of the government, photographs of Wen’s office in Xinhua were empty of their books, a demonstration of his definitive absence.

These decisions by Hu and Wen led to Jiang effectively being forced to vacate the offices he continued to maintain at Zhongnanhai, the Party’s leadership compound, and at the military commission.

If this was not enough, Xi Jinping went to lengths to address questions of “work style,” Party jargon for personal and professional conduct, part of which stipulated a variety of rules that also sought to hem in retired officials and limit their political clout.

The final exclamation mark on this shift in eras has perhaps yet to come, but the high-profile arrests of Jiang’s proteges—Xu Caihou in the military, and Zhou Yongkang in the public security apparatus—have demonstrated Xi Jinping’s increasingly thorough grasp on the levers of power, to the exclusion of those that came before.