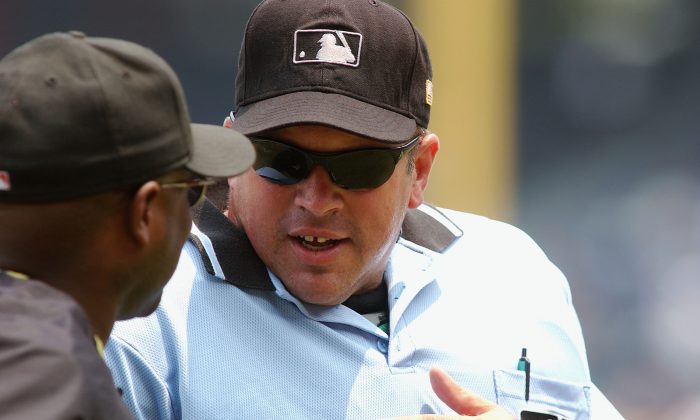 With the advance in modern baseball of instant replay, all the technology at the ready, and a world of social media on board, the game today especially for umpires is vastly different than that in the primitive days of the national pastime. What follows is a glimpse into the lot of the men (not always) in blue.

Early umpires were selected from the assembled crowd or even from the ranks of players. They personified the amateur spirit of the game of baseball. And since it was an “honor” to be called to that task, the early umpires received no financial compensation for their duties.

They wore whatever clothing they wished. Some of the more stylish early fellows showed up bedecked in Prince Albert coat, cane, top hat. They sat at a table or took up a stance or kneeled on a stool a brave distance from home plate along the first-base line.

The National League in 1878 revolutionized things by ruling that umpires would be paid five dollars a game and gave the arbiters the right to fine players up to twenty dollars for the use of foul language. Umps were also given the power to eject rowdy fans.

In 1879 the N.L. named twenty men whom it deemed fit to be a cadre of umpires. For the sake of logistical convenience, the umpires chosen all lived in or close to cities where National League franchises were located. Prior to 1879, rival captains of teams had mutually agreed on whom they preferred to umpire a game. Now the league ruled that umpires could be chosen only from the select list of twenty men.

The gradually increased duties and independence of umpires were reflected in an 1882 ruling that abolished the practice of arbiters appealing to fans and players for guidance on a disputed play. Now umps were on their own to “call them as they saw them.” And from 1882 on, all players except for the team captains were theoretically banned from engaging in any kind of menacing or meaningless banter with the umpire.

That 1882 season the American Association put in place a salaried staff of three umpires to be paid $140 a month. It was also the American Association that innovated clothing umps in blue caps and coats-a uniform that was aimed at giving the arbiters an air of respectability. Those uniforms were to become part of the folklore of the game the dress code for the “men in blue.”

In 1883 the National League copied the practice of the American Association, appointing four umpires for the season who drew salaries of $1,000 each. To ensure neutrality, to quell complaints that the new umps would not be political appointees, all the umpires were unknowns who came from cities that did not have National League franchises. The four men operated under trying conditions—serving without tenure, serving at the suffrage of the owners. Complaints by any four teams were grounds for the firing of any of the umpires, and not surprisingly just one of the four umpires made it through the entire season.

Changing rules, polemics in sports sections of newspapers criticizing umpires, the rugged nature of play—all of these made the work of the men in blue a tough task. Such terms as “daylight crime,” “robbery,” and “home umpire” were part of the lexicon of the times applied to the alleged foibles and flaws of arbiters.

In 1884 barbed wire was fastened around the field in Baltimore to contain the fans. That same season an umpire was beaten by an angry mob when he called a game a tie because of darkness. Police escorts were commonplace to move umpires out of ball parks and away from the menace of irate fans.

Dumping on the umpire was a practice encouraged by owners, who realized that fans howled in delight at the sight of authority being humiliated. “Fans who despise umpires,” Albert Spalding noted, “are simply showing their democratic right to protest against tyranny.” The protests pushed profits at the box office, and owners willingly paid fines meted out to players by umpires.

The system of two umpires working a game came into being in 1887 in postseason competition between the National League and the American Association. The first set of double officials was John Gaffney and John Kelley.

As a class those early arbiters were a colorful and tenacious group of men—they had to be, considering the not so genteel band of athletes they had to deal with. Umpire Billy McLean, who plied his trade in Boston and Providence, was a quick-triggered type. An ex-boxer, McLean kept himself in top physical condition; it was reported that he once arose at 4 A.M. and walked from his home in Boston to his umpiring job in Providence.

John Gaffney was called the king of umpires because of his longevity and resiliency. At one point, Gaffney was the highest-paid umpire, earning a salary of $2,500 plus expenses.

Bob Ferguson was another standout man in blue. “Umpiring always came as easy to me,” he said, “as sleeping on a featherbed. Never change a decision, never stop to talk to a man. Make ’em play ball and keep their mouths shut, and never fear but the people will be on your side and you’ll be called the king of umpires.”

Tim Hurst, who coined the now-famous phrase about umpires, “The pay is good, and you can’t beat the hours-three to five,” was another of the fabled arbiters of nineteenth-century baseball. A rather smallish man who came out of the coal mining region of Pennsylvania, Hurst was quick-witted and quick-fisted.

In 1897 during the course of a game in Cincinnati, Hurst was struck in the face by a stein of beer that was hurled out of the stands. Hurst flung the stein back; it hit a spectator and knocked him out. A frenzied mob surged out onto the field heading for Hurst. Policemen made contact with the umpire first. They charged him with assault and battery and arrested the irate Hurst, who was fined $100 and court costs by a judge.

Then there was the fracas in Washington in which Hurst mixed it up verbally with Pittsburgh’s Pink Hawley, Jake Stenzel, and Denny Lyons. The quartet agreed to meet after the game to settle things once and for all.

Hurst went to work quickly. He punched Hawley in the face, smashed his foot into the shins of Lyons, and roughed up Stenzel.

“Timothy, what is all the excitement?” asked National League President Nick Young, who as it turned out just happened to be passing by.

“Somebody dropped a dollar bill, Uncle Nick,” replied Hurst, “and I said it was mine.”

“Oh, you’re sure that’s all?” asked Young. “It looked to me like there was some kind of a riot going on. Did the dollar bill really belong to you?”

“Not really. It belonged to Hawley, but these other two tried their best to take it away from him, and I wouldn’t let them. It was just pink tea.”

“Timothy, you did the right thing.” Young smiled. “Now let’s leave these follows alone. Come and take a walk with me.”

Two umpires from that epoch went on to become National League presidents—John Heyder and Tom Lynch. Both men confessed to recurring nightmares of their time as umpires.

With all the pain and the abuse of the job of umpiring, there were some redeeming aspects. The early umpires loved the game of baseball. They earned an average salary of $1,500 for seven months of employment, and as umpire Tim Hurst noted, it was a job where “you can’t beat the hours.”

In 1898 the Brush Resolution was passed, slightly improving the umpire’s lot. John T. Brush, National League mogul, pushed owners into endorsing a twenty-one-point program to do away with the bullying of umpires. Expulsion for “villainously foul language” and umpire baiting were at the heart of the resolution.

The “purification plan” never worked and was ultimately given up as hopeless—no case ever reached the appointed discipline board, but it did raise the consciousness of the public, players, and writers about the plight of umpires forced to contend with the riotous behavior of scrappy and excitable players.

“Kill the Umpire” would be a phrase of symbolic import in the future and that was a large step forward, for in the not so genteel days of the gilded age, that phrase had a darker and more sinister meaning.