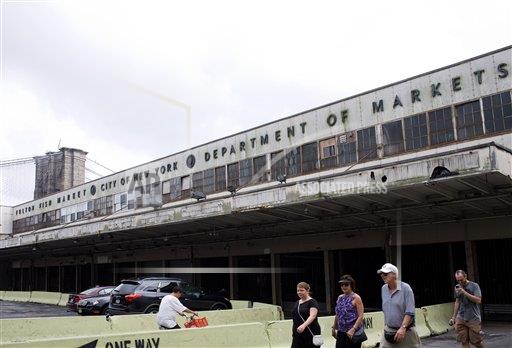 NEW YORK—A bid to extend the South Street Seaport Historic District to include the New Market Building has been denied. In an Aug. 21 letter from the Landmarks Preservation Commission’s (LPC) Director of Research, Mary Beth Betts stated the property “does not appear to meet the criteria for designation.”

The letter also states that the property will not be recommended to the LPC’s full commission for any additional consideration as a New York City landmark. The New Market Building was opened in 1939 by the Works Progress Administration.

The LPC decision comes against a backdrop of concerns over plans that the building’s landlord, The Howard Hughes Corporation (HHC), will tear the building down and replace it with a high-rise structure. HHC is about to begin construction of a new building on Pier 17, which abuts the New Market Building.

The New Market Building, also known as one of the old Fulton Fish Market buildings, falls just outside of the border of the South Street Seaport’s historic district. Without the designation, the building is subject to development without public review.

The Historic Districts Council (HDC), an organization that advocates for historic neighborhoods in New York City and filed the request for the designation consideration, plans to keep pushing to protect the building.

“We do not believe that Howard Hughes is a good steward [of historic buildings],” said Simeon Bankoff, executive director of the HDC, in an interview by phone. He added that his organization would like to see the building repurposed. It has been closed for several years.
So far the council hasn’t been successful in meeting with HHC, but it is willing to.

“If you start from the premise of retaining the building, then we can have a sensible conversation,” said Bankoff.

“The site lacks architectural significance,” according to a statement by LPC.

The Landmarks Law criteria is that a landmark has “a special character or special historical or aesthetic interest or value as part of the development, heritage or cultural characteristics of the city, state or nation.”