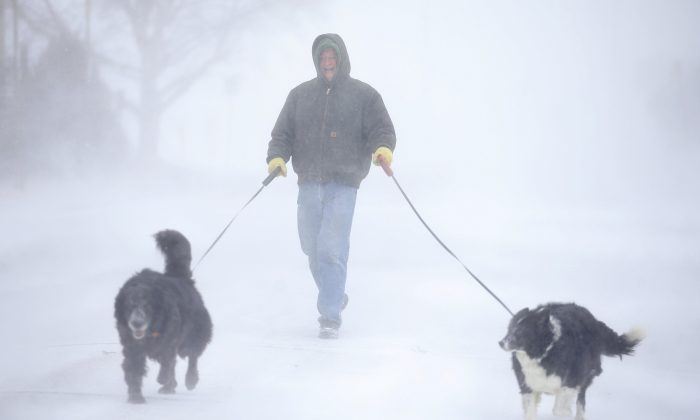 Tom Skaar of Cheyenne laughs while walking his dogs on House Avenue during a blizzard in Cheyenne, Wyo, on March 13, 2019. (Jacob Byk/The Wyoming Tribune Eagle via AP)
US News

The Old Farmer’s Almanac is forecasting that portions of the United States will see a “snow-verload” during what has been described as a snowy winter.

For instance, it is predicting a “wet and wild” 2019-20 winter in the northeastern U.S.

But overall, it is calling for “shivers, snowflakes … and strong storms” with the “snow-verload” impacting northern states in the Midwest and West.

“In the U.S., this winter will be remembered for strong storms bringing a steady roofbeat of heavy rain and sleet, not to mention piles of snow. The 2020 old Farmer’s Almanac is calling for frequent snow events—from flurries to no fewer than seven big snowstorms from coast to coast, including two in April for the Intermountain region west of the Rockies,” it wrote on its website.

Meanwhile, the middle of the country and New England will have “more wet than white” conditions. “Meanwhile, much of the Deep South will be saturated by soakers. As winter rages, the tip of the nice-berg will be Florida, the Gulf Coast, and Texas, which will bask in pleasant weather,” the Almanac said.

Temperatures will also plunge “from the Heartland westward to the Pacific and in the Desert Southwest, Pacific Southwest, and Hawaii,” it added. Above-normal temperatures are forecast elsewhere.

“This could feel like the never-ending winter, particularly in the Midwest and east to the Ohio Valley and Appalachians, where wintery weather will last well into March and even through the first days of spring,” Almanac editor Janice Stillman said.

After that, temperatures will be quite hot across the eastern two-thirds of the country in spring and summer, the Old Farmer’s Almanac said.

“In Canada, temperatures will average above normal everywhere except southern British Columbia which will bear the brunt of winter’s chill, with colder-than-average temperatures that include occasional face-freezing frigidity in January and February. Of course, normal-or-better winter temperatures still means cold. It’s winter, after all,” it said.

The 2019-2020 season, according to forecasters, will be another “wild ride” with heavy snow across much of the country, and they described it as a “polar coaster.”

“The biggest drop—with the most freefalling, frigid temperatures—is forecasted to take hold from the northern Plains into the Great Lakes. The Northeast, including the densely populated corridor running from Washington to Boston, will experience colder-than-normal temperatures for much of the upcoming winter. Only the western third of the country will see near-normal winter temperatures, which means fewer shivers for them,” said the Almanac on its website.

Similar to last winter, the coldest outbreak of the forthcoming winter season could arrive during the last week of January and beginning of February, the Almanac said.

In late January and early February of 2019, a so-called “polar vortex” hammered much of the United States and brought with it Arctic temperatures. Some areas around the Midwest and Great Lakes had wind chills of minus 40 to 65 degrees below zero.