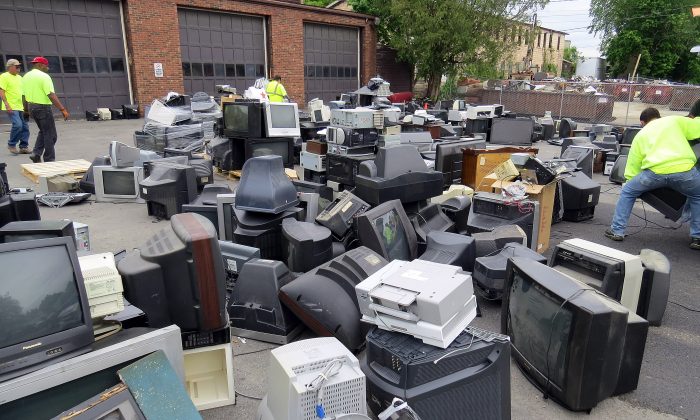 The Middletown Department of Public Works Recycling Center in Middletown during Electronics Drop-off Day on May 21, 2016. (Courtesy of Jerry Kleiner)
New York

The line of cars going down the street during Middletown’s May 21 electronics drop-off day was “overwhelming,” said Middletown Commissioner of Public Works, Jacob Tawil, and they were completely unprepared for it.

“When we started at 9:00 in the morning, we only had two guys in here—we didn’t expect much,” he said.

“We got an enormous amount this springtime, more than we’ve gotten ever in a whole year,” said Mount Hope Highway Supervisor Dean Hassenmayer.

He suspects it has something to do with the Village of Otisville terminating their electronics drop-off, and holding cleanup week at the same time as Mount Hope.

We got an enormous amount this springtime, more than we’ve gotten ever in a whole year.
— Dean Hassenmayer, Supervisor, Mount Hope Highway Department

Otisville Public Works Supervisor Frank Valentino said the village stopped because a state law went into effect at the beginning of this year, banning curbside electronic pickup. The village still does not accept drop-offs, he said, but it may in the future.

The Town of Wallkill has stopped accepting old electronics at town hall because non-residents were taking advantage of the free service, said Public Works Commissioner Louis Ingrassia Jr. Now residents have to go to the town’s Highway Garage and show proof of residency to dispose of their electronics for free.

Because of the increasing cost, he suggested to the Town Board members that they set up several electronics days throughout the year instead of taking them on an ongoing basis.

The county is also struggling with electronics recycling, but in a different way. The vendor that was recycling the county’s electronics pulled out in February, and as of March 1, the county stopped accepting electronics altogether.

“In fact, we still have their containers with electronics in them sitting in our transfer stations,” said Deputy Commissioner of Environmental Facilities and Services, Peter Hammond, in a phone interview.

He was never given a reason as to why the vendor pulled out, but he suspects it had to do with the market.

“Electronics recycling is no longer economically viable at the rates that they were paying for [it],” Hammond said.

He told the county’s Physical Services Committee on July 25 that  prices for all recycling are down, and that of the seven recyclers he is looking at contracting with now, only one has offered to pay for some of the electronics.

“So recycling is not cheap,” he told committee members. “[And] we’re looking at an environment that is getting [more] expensive.”

In 2010, the state created the Electronic Equipment Recycling and Reuse Act, which required manufacturers to bear the responsibility for recycling their electronics—and others they didn’t manufacture—starting in 2011.

Under that act, municipalities are not required to accept electronics for recycling, but can contract with manufacturers or collective electronic waste acceptance programs to serve as a collection site.

The problem is that when manufacturers hit their minimum, annual recycling goals as set by the state, they are not required to pay for more recycling, thus leaving municipalities to either pay the bill, charge residents, or not accept them at all.

It’s an issue that has been building for years, but it became more pronounced when a law banning curbside electronic pickup went into effect for all consumers this year, which also made it illegal to send electronics to the landfill.

The other problem is cathode ray tubes, or CRTs.

The state wasn’t prepared for the onslaught of old televisions and computer monitors with CRTs, which are heavier than their flat screen counterparts, and contain lead.

There is also no market for them once recycled, and because they are being thrown out in great numbers, their cost is bringing up the cost of all recycling.

Hammond said this is the first time “ever” that vendors are charging for TVs, which he estimates makes up 75 percent of the weight of the electronics the county gets.

County Legislator Chris Eachus said at the July 25 committee meeting that he is getting calls from constituents asking where they can recycle their electronics after the county stopped accepting them. Even if the county has to charge a small fee to take them, he said, it is better than not being able to take them at all.

“I would much rather have us pay if we have to than seeing these things appearing on the side of the road,” he said.

That is one option the county is weighing, Hammond responded, and asked for input from the legislature as to what might be an appropriate fee.

Recognizing the financial burden electronics recycling is putting on local governments, the governor announced on July 22 that the state would be offering $3 million in grants from the Environmental Protection Fund to offset electronic recycling costs.

The grants cover 50 percent of the expenses incurred between April of this year and the end of March in 2017.

Hammond said the county would apply, but expressed skepticism as to how far $3 million would go for the entire state.

Legislator Barry Cheney pointed out that whatever the cost to recycle electronics, “it’s not as bad as putting it in the transfer station and trucking it out to the landfill.”