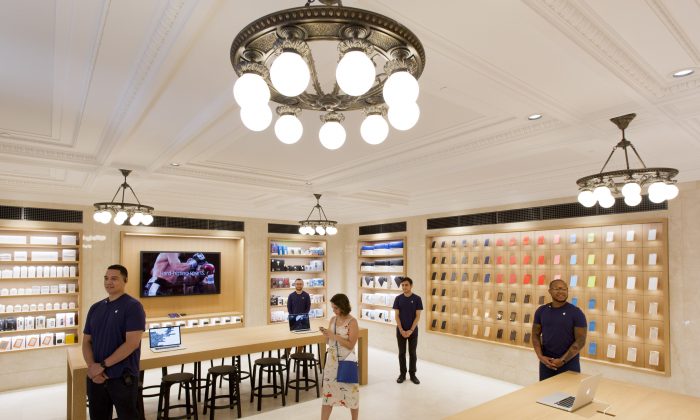 In With the Old: Apple Restores Former Bank for New Store

NEW YORK—To create the newest Apple store to sell iPhones, smartwatches, and other modern gadgetry, Apple took a look back at the 1920s.

The new store on New York’s Upper East Side occupies part of a Beaux Arts building that originally housed the U.S. Mortgage & Trust bank. Apple sought to restore some of the building’s old grandeur by reproducing the original chandeliers seen in old photographs, restoring marble floors and pilasters, and turning a bank vault into a VIP showroom.

It’s all part of Apple’s effort to keep its stores distinct—not just from other retailers but from each other.

And as Apple looks to open new stores or renovate existing ones—including the iconic New York Fifth Avenue store, with its distinctive glass-cube entrance—the company will look for additional ways to do that.

“It’s no different than every customer downloads different apps and customizes their phones differently,” said Angela Ahrendts, the senior vice president who oversees the company’s retail and online stores.

Many retailers keep their stores uniform so you can recognize them when visiting a new city or country. Even if you don’t see its logo, you can often tell a McDonald’s is a McDonald’s from its distinctly sloped roof.

Apple has generic stores, too, such as ones in shopping malls. Many of Apple’s larger stores in major cities make heavy use of glass, giving them a modern, open feel.

But Apple has its share of stores that try to blend into original, classical architecture, though most are in Europe, where such buildings are more prevalent. The store in New York’s Grand Central train station sits at the top of a marble staircase. The one across the street from Paris’s Opera House greets customers with mosaic floor tiles. The Brisbane, Australia, store is in a building that served as an Allied military headquarters during World War II.

Stephenson said Apple is a pioneer in designing stores, but even chains such as McDonald’s and Starbucks are rethinking how they make stores fit into their settings.

Apple’s new Upper East Side store, which opens Saturday, has a marble entrance and no sign of anything Apple outside, save for a black flag with a white Apple logo hanging from the bank’s original flagpole. While the store itself is small, tall ceilings and the usual open layout make it look spacious.

The teller windows might be gone, but Apple went into minute details to restore the building.

The entryway, stairs, and other parts of the architecture are made of Botticino marble, the same Italian marble used at Grand Central and Penn Station in New York (and what was originally used in the bank). Six metal chandeliers—reproduced to match the originals from old photographs—grace the ceilings.

Downstairs, the heavily reinforced vault, complete with a massive steel door behind a set of steel bars, might remind visitors of an old gangster movie. This time, though, the door leads to a room for VIP customers, meetings, and other purposes.

Upper East Side will be Apple’s 266th store in the United States and seventh in New York City, a key market for Apple because it gets twice as much traffic as stores in other U.S. cities.

The neighborhood has a mix of boutiques, art galleries, museums, and residential units. Some residents worry about long lines and traffic, particularly when Apple releases new products. A lawsuit filed in a New York state court last week warns of diminished property values and quality of life.

But Apple has cleared the necessary regulatory hurdles. The store is about half the size of most other Apple stores and is designed primarily for local residents and businesses needing a repair or training, Ahrendts said. Many people now buy products online anyway, she noted.

“The cube works brilliantly on Fifth Avenue and has been one of the most iconic sites,” she said. “But that works there. That wouldn’t work everywhere.”

As Apple opens new stores, it will also renovate about 20 existing U.S. stores, including the ones on Fifth Avenue and San Francisco’s Union Square. Ahrendts said 60 percent of the U.S. stores predate the iPhone and have outgrown their space. Many stores slated for renovations will also double in size, in some cases moving to a new location nearby. That gives Apple opportunities to rethink designs.

The Fifth Avenue store, which draws tourists from around the world, will temporarily move soon to another iconic space, the F.A.O. Schwarz toy store that Tom Hanks made famous in “Big.”