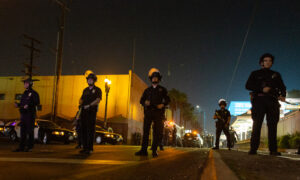 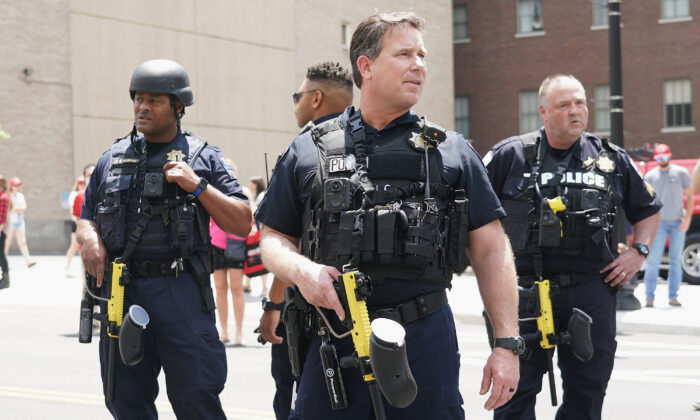 Members of the Tulsa Police Department look on in Tulsa, Okla. on June 20, 2020. (Michael B. Thomas/Getty Images)
Judiciary

The Oklahoma Supreme Court ruled on April 13 that the Norman City Council violated the state’s Open Meeting Act, or Sunshine Act, when it approved a budget that slashed $865,000 from police department funding in June last year, amid calls to “defund the police” spurred by social justice advocates in response to the May death of George Floyd in Minneapolis.

The state’s top court unanimously upheld a December ruling from the Cleveland County District Court that found cutting the sum from the police department’s Fiscal Year 2021 budget violated the law, after the Norman Fraternal Order of Police filed a lawsuit against the city council.

The notice for the June 16, 2020, meeting “was deceptively worded or materially obscured the stated purpose of the meeting and is therefore a willful violation” of the state’s Open Meetings Act, a District Court judge ruled at the time. The notice said the council was going to consider adoption of the city’s proposed operating and capital budgets for the upcoming fiscal year, The Oklahoman reported.

“Any person who read the language used would not have understood that there would be a defunding, a reallocation, or modification of any underlying departments’ budget,” the judge wrote.

“The question before this Court is whether City of Norman, Defendant/Appellant, complied with the statutory notice requirements of the Open Meeting Act, 25 O.S.2011, §§ 301–314, for its June 16, 2020 special meeting. We answer in the negative,” the Oklahoma Supreme Court said Tuesday in upholding that ruling.

The ruling also found that the city’s budget is invalid.

The cuts came as the “defund the police” movement emerged following the death of Floyd, an African American man who died while in Minneapolis police custody.

Mayor Breea Clark said at the time that the budget amendments “reflect an intentional effort to tackle systemic racism in our community and to be proactive as opposed to reactive in meeting the social service needs of our residents.”

A cut of $4.5 million to the police department’s budget was initially proposed by city council member Alexandra Scott.

Following the ruling, city spokesperson Annahlyse Meyer told The Associated Press, “We are reviewing it and will comply with the Supreme Court ruling.” The city council will have to vote again on the budget. However, a date has yet to be set.

In a statement, Sen. Rob Standridge (R-Norman) applauded the Supreme Court’s decision while noting that the city has already “become less safe” since the funding cuts last June.

“I applaud the Supreme Court’s decision but the damage caused by that vote is already apparent,” Standridge said. “Since that vote against public safety, the city of Norman has become less safe according to trends we’re seeing in crime statistics for the community.”

Elsewhere, Los Angeles County Sheriff Alex Villanueva told Fox News in an interview that aired April 15 that violent crime has soared because criminals have been emboldened by the “defund the police” movement, as well as by the progressive law enforcement policies advocated by leaders like Los Angeles County District Attorney George Gascón.

Villanueva said the county recorded 60 homicides during the first two months of the year, compared to 21 in same period a year earlier.