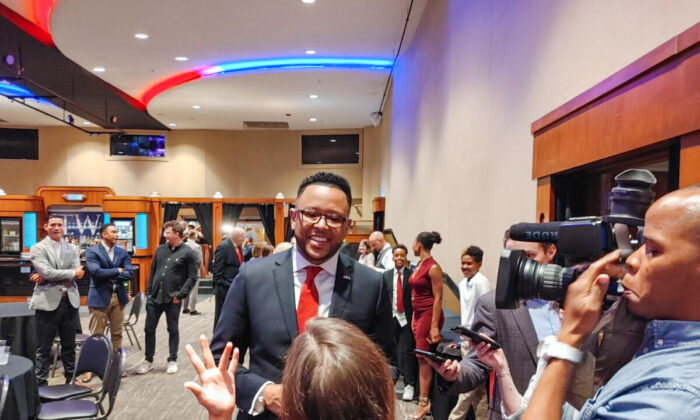 After deciding among 13 candidates in the Oklahoma U.S. Senate special GOP election primary on June 28, voters will now choose between two.

Since no one surpassed the 50 percent mark, Mullin and Shannon will meet in a runoff on Aug. 23 to determine who will win the Republican nomination in a battle to replace Republican Sen. Jim Inhofe.

Kendra Horn, who served as a U.S. representative in Oklahoma’s 5th Congressional District from 2019 to 2020, was unopposed in the Democratic primary and will face the winner of the runoff in November.

Libertarian Robert Murphy and independent candidate Ray Woods are also on the ballot.

Mullin and Shannon agree that the runoff represents a reset in the campaign since Oklahomans will hear from two choices instead of 13.

“It’s like starting a new campaign,” Mullin told The Epoch Times. He was first elected to Oklahoma’s 2nd Congressional District in 2013. “You only have one opponent instead of 12, and it is important to reach as many people as possible since, typically, runoffs have a lower voter turnout.”

Shannon, who served in the Oklahoma House of Representatives from 2006 to 2014, and was Speaker of the House from 2013 to 2014, pointed out that Mullin “had a head start with fundraising and money from the D.C. establishment” and that the runoff provides more time to build awareness.

“For us, it’s important to get out there and tell our story,” Shannon said at his watch party at the Will Rogers Theatre in Oklahoma City on June 28. “I’m a conservative, a Christian, and a capitalist. That message still resonates, especially when I am running against someone entering his second decade in D.C.”

On June 29, Shannon told reporters that “Markwayne is a friend” but “there are differences between us.”

“I’m an America First and Oklahoma Always candidate. He (Mullin) is part of the D.C. establishment,” said Shannon, a former co-chair of Black Voices For Trump. “We have a uniparty in D.C. that works together. Washington takes care of Washington. I will push against the woke agenda for Oklahomans and Americans.”

A former professional mixed martial arts fighter who owns Mullin Plumbing and Mullin Farms, among several other businesses, the 44-year-old Mullin held a comfortable lead in the polls and owned a 3-to-1 advantage in fundraising over the other candidates.

“I ran for Congress the first time because I was fed up with how much it was costing our company to comply with simple state and federal regulations,” Mullin told The Epoch Times. “A bunch of bureaucrats who have never created a job in their life try to tell us how to run our businesses.”

“In the lower chamber, we really deal with the legislative side of things. The Senate helps determine how federal agencies affect us,” Mullin explained. “Bureaucrats are making it almost impossible to create jobs they want to be created because of regulations from agency officials. Heads of agencies are confirmed by the Senate. That is where the fight is.”

When Republican Sen. Tom Coburn announced his resignation in 2014, Shannon ran for that seat but lost to James Lankford in the primary. Lankford won the general election that November. On the same night that Mullin and Shannon advanced to a runoff, Lankford defeated two challengers in the other Oklahoma Republican Senate primary.

The Cook Political Report, Inside Elections with Nathan L. Gonzales, and Larry J. Sabato’s Crystal Ball rate the special election and Lankford’s bid for reelection as either Solid Republican or Safe Republican.

Shannon stepped away from politics at the age of 36, finished his law degree at Oklahoma City University, and became CEO of Chickasaw Community Bank in Oklahoma City.

“America is home of systemic opportunity, not systemic racism,” Shannon told The Epoch Times. “The far-left narrative says that, unless you’re from a specific zip code and of a specific heritage, then America doesn’t work for you. I’m proof that narrative is a lie.

“I was elected to the state legislature when I was 33 years old and then became the state’s youngest Speaker of the House. Now I’m the CEO of a bank,” Shannon added. “That only happens in America.”

Oklahoma is a deep red state. Donald Trump won Oklahoma with 65 percent of the vote in 2020. Mullin and Shannon are pro-Trump, but the former president has not made an endorsement in the race.

Mullin and Shannon have similar views on multiple topics, including religious values, protecting the Second Amendment, and standing against abortion.

Even before the Supreme Court overturned Roe v. Wade earlier this month, both candidates were outspoken supporters of the pro-life movement.

Shannon called Planned Parenthood “the true face of White supremacy in America” in a May campaign ad and posted on Twitter that “Black babies have been targeted by the abortion lobby and the Dems since day one. Don’t you dare say ‘Black Lives Matter’ til you admit that black babies matter.”

In the ad, Shannon stood outside a Planned Parenthood location and called founder Margaret Sanger a “vile racist” because of her belief in eugenics that Shannon says frequently focused on black people.

“400,000 Black babies killed every year since Roe v. Wade,” Shannon said in the ad, which featured a graphic that read, “Just like they planned.”

“Don’t tell me black lives matter until these lives matter,” Shannon said at the end of the ad.

According to 2019 data from the Centers for Disease Control and Prevention, 629,898 legal abortions were reported by 47 states. The figure does not include California, New Hampshire, Maryland, and Washington D.C.

Pew Research reports that in Washington D.C. and the 29 states that provide racial and ethnic data on abortion to the CDC, 38 percent of all women who underwent an abortion in 2019 were non-Hispanic black, though 2020 U.S. Census numbers indicate that black people comprise 12.4 percent of the population.

CDC data from 2019 also indicates that black women are five times more likely to have an abortion than white women. Latina women are twice as likely, the information shows.

“The reality is their founder wanted to exterminate black people,” Shannon told reporters in May. “In this day of where Democrats want to cancel everybody whose ever been associated with anything evil, or ever been associated anything that even appears to not be politically correct, there was a woman who created an organization to exterminate black people.”

In April, Oklahoma Republican Gov. Kevin Stitt signed Senate Bill 612 into law, which bans abortion in the state, except in the case of a medical emergency.

Under the legislation, performing or attempting to perform an abortion can, in most cases, result in a felony accompanied by a maximum fine of $100,000, as many as 10 years in state prison, or both.

In May, Stitt signed the Oklahoma Heartbeat Act, or Senate Bill 1503, which became effective immediately and prevents abortions as soon as a doctor can detect a fetal heartbeat, which can happen as early as six weeks into pregnancy.

“The most important thing our government can do is protect its citizens, and that especially includes the sanctity of life,” Shannon told The Epoch Times at his watch party. “That’s exactly what we should be doing as a society, and as representatives of the people.”

Mullin and his wife, Christie, have six children, three of whom are adopted.

“I thank God every day that the mothers who chose to give birth to our three adopted kids that we love so much didn’t take the abortion route,” Mullin told The Epoch Times at a primary election day kickoff event at Hideaway Pizza in Oklahoma City. “It is hard to understand why anyone would say, ‘It’s just a fetus,’ and end that life.

Mullin has taken action regarding abortion-related topics in recent months.

Responding to the five fetuses that were discovered in Washington D.C. and speculated to have perished because of partial-birth abortions, Mullin introduced the Partial-Birth Abortion is Murder Act in April.

The same organization has reportedly taken credit for more than a dozen attacks in recent months at churches and pregnancy centers.

Mullin was one of the Congressional Republicans who urged the Department of Homeland Security to classify Jane’s Revenge as a domestic terrorist organization.

“It’s past time the Biden Administration quits with the complacency and investigates these members for exactly what they are: domestic terrorists,” Mullin told reporters.

Leading up to the June 28 special election primary, Mullin was criticized by opponents for not appearing at a debate jointly conducted by TV stations in Oklahoma City and Tulsa.

Mullin decided to remain in Washington D.C. to vote on a bill that featured gun control restrictions. The bill was approved, 224-202. Mullin joined most Republicans in voting against the legislation.

“The residents of the 2nd Congressional District elected me to represent them and uphold Oklahoma values, and that is what I did,” Mullin told The Epoch Times. “It was a lose-lose situation because, if I was there (at the debate), critics would have said I should have been in D.C. instead of campaigning. I made the choice of doing the job I was elected to do.”

Mullin will debate Shannon before the Aug. 23 runoff, according to Tulsa’s KOTV News on 6.

When asked about a debate with Mullin in an interview with News on 6 on June 29, Shannon smiled and said, “Anytime, anywhere. That is part of your duty as an elected official—to face voters and ask them for their vote. That’s what we’ve done up to now and we will do it in the runoff for sure.”

When told that Mullin said he will debate, Shannon said, “Let’s go.”