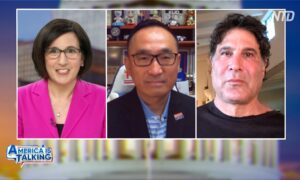 Parts of Oklahoma have been ravaged by Tropical Storm Bill, which dumped heavy rains on much of the southeastern U.S.

In Ardmore, Okla., local man Roho Hartman was trying to cross a country road that turned into a flooded river. He ended up getting his car stuck in the flood waters.

“There was a car on the other side. He went through it,” said Hartman, per KSL. “I thought, huh. I believe I’d make it too.”

He was trying to get his vehicle un-stuck, and just then, a familiar yet famous face showed up to help.

“The guy said ‘Are you ready?'” said Hartman. “I thought, that looks like Blake Shelton,” the country music singer and TV star.

Hartman told his wife about it.

“I said, ‘You wouldn’t believe it. Blake Shelton pulled me out,'” added Hartman. “Told her, ‘You better slick up, we’ll be there in just a minute.'”