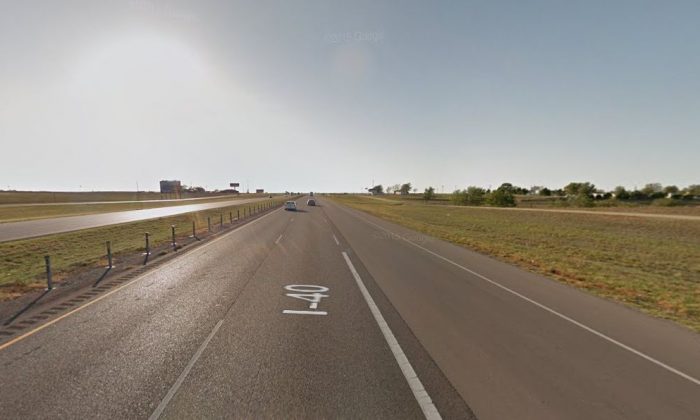 I-40 near the town of Hydro, Oklahoma (Google Street View)
US

ARAPAHO, Okla.  — A man firing randomly from his pickup truck killed two people in separate shootings on an Oklahoma interstate, a local sheriff said. The suspected shooter surrendered early Thursday and was being held in a county jail.

Custer County Sheriff Bruce Peoples said reports came in at about 11:50 p.m. Wednesday of a man firing at vehicles on Interstate 40 in Canadian County, which is adjacent to Oklahoma City. The man apparently continued driving west, firing at vehicles as he drove fast and erratically, the sheriff said.

“He shot so many vehicles that it would have been totally impractical to assume he knew them,” Peoples said, describing the case as a suspected road rage incident.

A man was fatally shot in the Caddo County town of Hydro and a woman was killed 10 miles away in Weatherford, authorities said. In both cases, the drivers were able to pull over to the shoulder of the road after the shooting, he said.

The Oklahoma State Bureau of Investigation identified the first victim as 45-year-old Jeffrey Kent Powell of Arapaho, who was traveling with his wife, who was not struck. The agency identified the second victim as 63-year-old Billie Jean West of Lone Wolf.

The suspect surrendered after a 25-mile chase shortly before 1 a.m. Thursday in Custer County, Peoples said. Oklahoma State Bureau of Investigation spokeswoman Jessica Brown said the man was being held at the Custer County jail on a preliminary complaint of driving under the influence. More charges are likely.

Peoples said Thursday that authorities had not yet interviewed the suspect to determine a motive, but they don’t suspect anyone was specifically targeted.

At least two other vehicles were hit by gunfire but those drivers escaped injury, Brown said. She said it’s early in the process but investigators believe the man picked his victims indiscriminately.