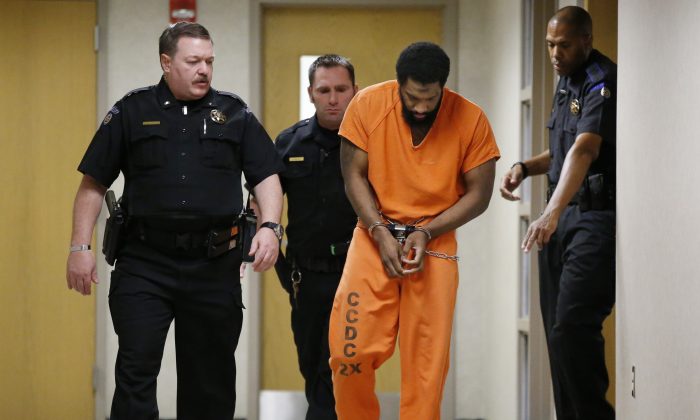 Alton Nolen is led from the courtroom following his preliminary hearing in Norman, Okla., Friday, Jan. 8, 2016. Nolen, accused of beheading a co-worker with a large butcher knife at an Oklahoma food processing plant, must stand trial for first-degree murder, a judge ruled after a hearing at which witnesses graphically described what they saw in the September 2014 attack. (AP Photo/Sue Ogrocki)
Crime and Incidents

NORMAN, Okla.—A man accused of beheading a co-worker with a large butcher knife at an Oklahoma food processing plant must stand trial for first-degree murder, a judge ruled Friday after a hearing at which witnesses graphically described what they saw in the September 2014 attack.

Alton Nolen could face the death penalty if convicted in the rampage at the Vaughan Foods plant in Moore, an Oklahoma City suburb. Cleveland County Special Judge Steve Stice ordered him to stand trial on charges including first-degree murder and assault and battery with a deadly weapon.

Nolen, 31, has pleaded not guilty. His attorney, Mitch Solomon of the Oklahoma Indigent Defender’s Office, declined to comment after the hearing.

Investigators have said Nolen had just been suspended from his job when he walked into the company’s administrative office and attacked Colleen Hufford, 54, severing her head. They say he also stabbed another co-worker, who survived, before he was shot by a company executive.

Gary Hazelrigg, Vaughn’s customer service manager at the time, said Hufford was in his office on Sept. 25, 2014, when a man he identified as Nolen came into the office and grabbed her, placing one hand on her forehead with the other hand holding a “large, heavy butcher knife drawn across her neck.”

“In no more than a second or two, the man pulled her forehead toward him and made a vicious cut across her throat with the knife,” Hazelrigg testified.

Nolen then threw Hufford to the floor, sat on top of her and sawed at her throat, Hazelrigg said. He said he repeatedly tried to knock Nolen off her. He said he thought he heard Nolen say: “Die … die.”

“At some point he jumped up and turned on me with the knife in hand,” Hazelrigg said. He said he picked up a chair to keep the distance between them and escaped into a locked room.

Aylor said he pulled Nolen off Hufford but lost his footing and fell backward. He said Nolen lunged at him with the knife 10 or 12 times as Aylor kicked at him.

“I wasn’t an easy victim. I fought back,” Aylor said. He said Nolen eventually ran away but is not sure why.

Mark Vanderpool, who was director of operations at the plant, testified that he was in the parking lot when someone shouted that Hufford had been attacked. Vanderpool said he entered the plant’s office area and sawNolen kneeling over Hufford, cutting at her neck.

“I ran up and kicked Mr. Nolen in the chin,” he said. Nolen lifted his head and then lunged at him with the knife, missing his midsection by no more than two inches, Vanderpool said.

Authorities have said Nolen ran down a hallway and attacked another employee, Traci Johnson, before the plant’s chief operating officer, Mark Vaughan, shot him with a rifle. Vaughan is also an Oklahoma County reserve sheriff’s deputy.

The victim’s daughter, Kelli Hufford, attended the hearing but did not testify. She issued a statement later in which she thanked supporters “who continue to keep our family in their prayers while we anticipate the trial and ultimately justice for my mom, Colleen.”