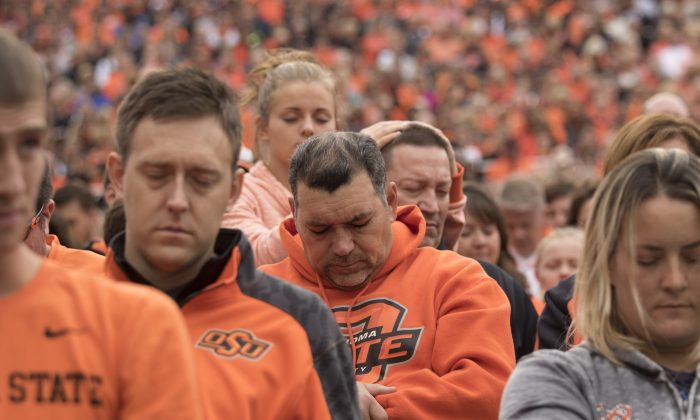 Oklahoma State football fans observe a moment of silence for the people killed by a car that crashed into the homecoming parade, during a NCAA college football game against the Kansas Jayhawks, at the Boone Pickens Stadium in Stillwater, Oklahoma, on Oct. 24, 2015. (J. Pat Carter/Getty Images)
Crime and Incidents

STILLWATER, Okla.—A woman accused of driving her car into a crowd of people at Oklahoma State University’s homecoming parade ran a red light, “purposely” went around a barricade and drove over a police motorcycle before crashing into the spectators, a prosecutor said Monday.

“The evidence suggests this was an intentional act, not an accident,” Payne County District Attorney Laura Thomas said in a public statement. The driver’s actions demonstrate “a depraved mind and indifference to human life.”

At a bail hearing, the district attorney told the judge that Adacia Chambers is “looking at four life sentences” if convicted in the deaths of four people who were hit.

Special District Judge Katherine Thomas granted the request for $1 million bail and ordered a psychological evaluation for Chambers, who is being held on preliminary counts of second-degree murder.

“This was a well-known parade day and route, and these innocents were visible from a substantial distance,” the district attorney said in the statement.

The suspect appeared at Monday’s hearing via video. The only time she spoke was to say “yes” when the judge asked if she could hear her.

Prosecutors asked for more time to interview the dozens of witnesses who were at the scene Saturday and said one of the injured is in a “fragile” state, which could lead to more charges.

In Oklahoma, second-degree murder charges are warranted when someone acts in a way that’s “imminently dangerous to another person” but does so without premeditation. Each count is punishable by at least 10 years in prison.

Chambers, 25, of Stillwater, has yet to be formally charged—a step that requires prosecutors to file additional documents in court.

The judge scheduled the next hearing for Nov. 13.

After the hearing, Chambers’ attorney, Tony Coleman, said when he told Chambers about the deaths, “her face was blank.” He said he was not sure Chambers is aware that she’s in jail. Chambers had yet to ask to see her parents or boyfriend.

Police are awaiting blood tests to determine whether she was impaired by drugs or alcohol.

During an earlier interview with Chambers, Coleman said he “was not satisfied at all that I was communicating with a competent individual.”

Coleman has said Chambers was at work before the crash and that she does not remember much, only that she felt confused as she was removed from the car.

Chambers’ father, aunt and boyfriend spoke outside the courthouse, telling reporters that they don’t know what led to the crash.

“I thought that was kind of strange, but I don’t know. She was very good about hiding her problems because she didn’t want the family to worry about her, and she kept to herself about things like that,” Chambers said, fighting back tears.

He said his daughter is a talented artist who loves music.

“I would like them (the public) not to think so badly of her, because that’s not just who she was. That’s not who I raised,” he said. “And when we get all the test results back, we’ll know.”

“This is so not her. This is not her character,” Branstetter said tearfully. “She’s one that’ll give you a big hug. And she’s one if you’re down, she’ll make you smile. That’s my Adacia.”

Her boyfriend, Jesse Gaylord, said Chambers had difficulty sleeping and only got an hour or two of sleep before leaving for work Saturday morning.

Gaylord said he never saw Chambers take any drugs—either prescription or illegal—and that the last time they drank alcohol was a few weeks ago, when they each had one beer on his birthday.

“As far as for her to purposefully go and do something, that would just not be possible. … She would never do anything like that consciously,” Gaylord said.

Gaylord said he had never even seen Chambers break any traffic laws.

“She’s honestly one of the most cautious drivers that I’ve ever ridden with. She never turns out in front of any cars. She doesn’t ever run yellow lights,” he said.

The crash killed three adults and a 2-year-old boy. At least 46 other people hurt, including many children.

The dead adults were identified as Nikita Nakal, a 23-year-old MBA student from India at the University of Central Oklahoma in Edmond, and a married couple, Bonnie Jean Stone and Marvin Lyle Stone, both 65, of Stillwater.