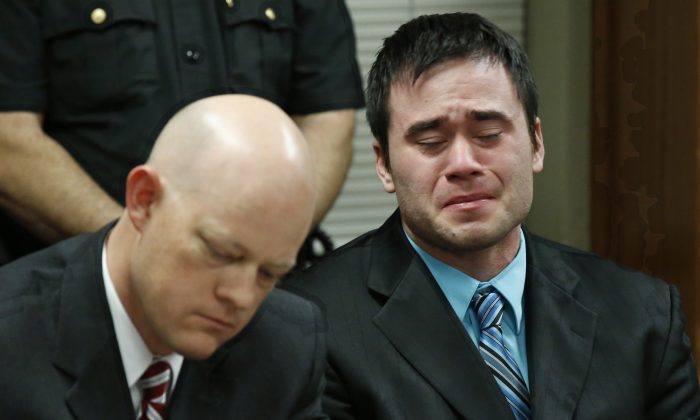 Daniel Holtzclaw, right, cries as the verdicts are read in his trial in Oklahoma City, Thursday, Dec. 10, 2015. (AP Photo/Sue Ogrocki)
US

OKLAHOMA CITY—A former police officer convicted of raping and sexually victimizing women while on his beat in a low-income Oklahoma City neighborhood was ordered Thursday to spend the rest of his life in prison.

Jurors had recommended that Daniel Holtzclaw be sentenced to 263 years in prison for preying on women in 2013 and 2014. District Judge Timothy Henderson agreed, said Holtzclaw will serve the terms consecutively and denied his request for an appeal bond.

Holtzclaw waived his right to remain in custody in the county jail for 10 days, instead opting to be taken directly to prison. Defense attorney Scott Adams said Holtzclaw will appeal.

Prosecutors said Holtzclaw targeted black women in neighborhoods east and north of the state Capitol building. During the monthlong trial, 13 women testified against him, and several said Holtzclaw stopped them, checked them for outstanding warrants or drug paraphernalia, and then forced himself on them.

All of the accusers were black. Holtzclaw is half-white, half-Japanese, and the son of a longtime Enid, Oklahoma, police officer.

Holtzclaw’s victims included a teenager and woman in her 50s. Three accusers delivered victim-impact statements Thursday, and at least one other was in the courtroom.

Several of Holtzclaw’s victims have filed civil lawsuits against Holtzclaw and the city in state and federal court.