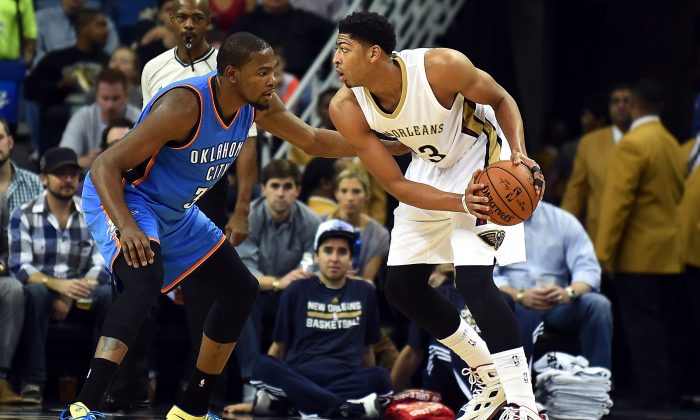 Anthony Davis #23 of the New Orleans Pelicans is defended by Kevin Durant #35 of the Oklahoma City Thunder during a game at the Smoothie King Center on December 2, 2014 in New Orleans, Louisiana. (Photo by Stacy Revere/Getty Images)
NBA

The Oklahoma City Thunder are coming off a tough loss and looking ahead to the upcoming games as the news and rumors ramp up.

Kevin Durant’s return was supposed to boost the Thunder to a win over the New Orleans Pelicans, but the team lost 112-104. Durant and coach Scott Brooks blamed the defense.

“We can’t afford to have five or six minutes of the defensive intensity disappearing on us,” Brooks told NBA.com. “Today’s film session on the floor was really good. We’re looking forward to coming back the next game and playing better.”

“We just have to be more engaged,” Durant said. “We have to be in a stance and trust our defensive schemes. It’s not going to be perfect every time or work every time, but the majority of the time it does. We’ve seen that the last six years. We have to stick to what we do and do it to the best of our ability.”

Brooks acknowledged that re-integrating Russell Westbrook and Durant will take time, but it should be easier on defense.

“There is going to be a period that we’re going to have to navigate through during the integration of some of our players coming back,” Brooks said. “That’s more of an offensive issue. Defensively, it’s a mindset of playing with toughness and playing with engagement. That has nothing to do with guys coming in and coming out.”

Durant added that he thought he did well against the Pelicans, playing 30 minutes and scoring 27 points on 9-for-18 shooting.

“I felt great,” Durant said. “I definitely wanted to play better but I’m glad I’m out there playing. When you’re away the game for so long, you just appreciate every second you’re on the floor. That’s how I felt last night.”

Other Players Close to Recovery

Durant and Westbrook weren’t the only players recovering from injury.

All three players practiced on Wednesday, making it the first time all year that the team had a complete 15-player practice.

“It feels great to have everybody back,” Durant said.

However, it was reported on Thursday that McGary, the 21st overall selection of the 2014 NBA draft, has been sent to the D-League.

The Thunder have an affiliate, the Oklahoma City Blue, where he’ll play for the time being.

Jones especially played well in the absence of Durant and Westbrook and figures to get a bigger role than last year.

Serge Ibaka had a rough game, being torched by Anthony Davis while performing poorly on offense.

Ibaka had 6 points on 3-for-11 shooting and only 3 rebounds (although he did have 4 blocks).

“Other than a pair of highlight plays (Ibaka drove by Davis for an impressive slam, then later blocked him on a fastbreak layup), the matchup was as one-sided as the stats would indicate,” said NewsOK.

“Even at 21, Davis is deserving of the MVP hype he’s been getting. This dude is the real deal. So his stacked stat-line isn’t much of a surprise.

“That Ibaka no-show, though, is another story. Six inefficient points on 11 shots — many of them wide open looks off pick-and-pops with the superstars — is bad. The three rebounds are worse. New Orleans owned the offensive glass on Tuesday (16 offensive boards) and Ibaka’s lack of effort in that area was a main reason. Rough night for him.”