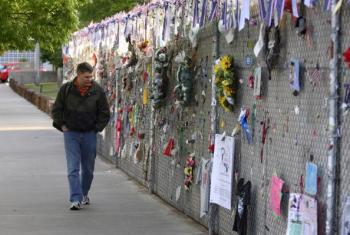 By Ian Ritz
Print
The Oklahoma City National Memorial & Museum hosted a solemn ceremony on the 15 year anniversary of the Oklahoma City bombing that killed 168 innocent men, women, and children in 1995.

Many Americans remember the tragic day of April 19, 1995 when Timothy McVeigh murdered innocent American citizens at the Alfred P. Murrah Federal Building in Oklahoma City. Workers were killed for seemingly no reason and those lost in the attack included children in day care. April 19 is the anniversary of a deadly 1993 federal assault on the Branch Davidian compound in Waco, Texas. McVeigh visited the site of the compound while it was besieged by federal agents.

Families and friends of victims started building simple memorials at the bombing site days after the blast. An impressive memorial and museum now stands on the grounds.

U.S. Homeland Security Secretary Janet Napolitano spoke at the memorial. She said, "What defines us as a nation, as a people and as communities is not what we have suffered, but how we have risen above it, how we've overcome."

The outdoor memorial remembering those lost in the bombing was dedicated by President Bill Clinton on April 19, 2000. President George W. Bush dedicated the museum on February 19, 2001. The memorial draws millions of visitors from all over the country and the world.

The Oklahoma City National Memorial and Museum was built to “remember those who were killed, those who survived and those changed forever. May all who leave here know the impact of violence. May this memorial offer comfort, strength, peace, hope and serenity. “ The purpose of the memorial is “educating visitors about the impact of violence, informing about events surrounding the bombing, and inspiring hope and healing through lessons learned by those affected,” said the museum website.

The Remembrance Ceremony began at 9:00 am on the memorial grounds where the blast occurred. Survivors and relatives of those who were killed in the bombing expressed their gratitude for the memorial, museum, and for participation in the event.

Timothy McVeigh was sentenced to death. He died of a lethal injection in June of 2001. McVeigh was convicted of causing the deaths of 168 people. His was the first federal execution since 1963, CNN reported in 2001.